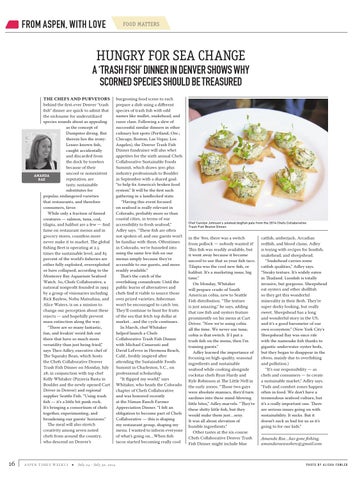 FROM ASPEN, WITH LOVE

A ‘TRASH FISH’ DINNER IN DENVER SHOWS WHY SCORNED SPECIES SHOULD BE TREASURED THE CHEFS AND PURVEYORS behind the first-ever Denver “trash fish” dinner are quick to admit that the nickname for underutilized species sounds about as appealing as the concept of Dumpster diving. But therein lies the irony: Lesser-known fish, caught accidentally and discarded from the dock by trawlers because of their uncool or nonexistent AMANDA reputation, are RAE tasty, sustainable substitutes for popular, endangered varieties that restaurants, and therefore consumers, favor. While only a fraction of finned creatures — salmon, tuna, cod, tilapia, and halibut are a few — find fame on restaurant menus and in grocery stores, countless more never make it to market. The global fishing fleet is operating at 2.5 times the sustainable level, and 85 percent of the world’s fisheries are either fully exploited, overexploited or have collapsed, according to the Monterey Bay Aquarium Seafood Watch. So, Chefs Collaborative, a national nonprofit founded in 1993 by a group of visionaries including Rick Bayless, Nobu Matsuhisa, and Alice Waters, is on a mission to change our perception about these rejects — and hopefully prevent mass extinction along the way. “There are so many fantastic, fun, and freakin’ weird fish out there that have so much more versatility than just being fried,” says Theo Adley, executive chef of The Squeaky Bean, which hosts the Chefs Collaborative Denver Trash Fish Dinner on Monday, July 28, in conjunction with top chef Kelly Whitaker (Pizzeria Basta in Boulder and the newly opened Cart Driver in Denver) and regional supplier Seattle Fish. “Using trash fish — it’s a little bit punk rock. It’s bringing a consortium of chefs together, experimenting, and broadening our guests’ horizons.” The meal will also stretch creativity among seven noted chefs from around the country, who descend on Denver’s

burgeoning food scene to each prepare a dish using a different species of trash fish with odd names like mullet, snakehead, and razor clam. Following a slew of successful similar dinners in other culinary hot spots (Portland, Ore.; Chicago; Boston; Las Vegas; Los Angeles), the Denver Trash Fish Dinner fundraiser will also whet appetites for the sixth annual Chefs Collaborative Sustainable Foods Summit, which draws 300-plus industry professionals to Boulder in September with a shared goal: “to help fix America’s broken food system.” It will be the first such gathering in a landlocked state. “Having this event focused on seafood is really relevant in Colorado, probably more so than coastal cities, in terms of our accessibility to fresh seafood,” Adley says. “These fish are often not spoken of, and our guests won’t be familiar with them. Oftentimes in Colorado, we’re funneled into using the same few fish on our menus simply because they’re accessible to our guests, and more readily available.” That’s the catch of the overfishing conundrum: Until the public learns of alternatives and chefs find it viable to source those over prized varieties, fisherman won’t be encouraged to catch ’em. They’ll continue to hunt for fruits of the sea that fetch top dollar at market…and the cycle continues. In March, chef Whitaker helped launch a Chefs Collaborative Trash Fish Dinner with Michael Cimarusti and David LeFevre in Hermosa Beach, Calif., freshly inspired after attending the Sustainable Foods Summit in Charleston, S.C., on professional scholarship. “It flipped my world,” says Whitaker, who heads the Colorado chapter of Chefs Collaborative and was honored recently at the Niman Ranch Farmer Appreciation Dinner. “I felt an obligation to become part of Chefs Collaborative — this is shaping my restaurant group, shaping my menu. I wanted to inform everyone of what’s going on…When fish tacos started becoming really cool

in the ’80s, there was a switch from pollock — nobody wanted it! This fish was readily available, but it went away because it became uncool to use that as your fish taco. Tilapia was the cool new fish, or halibut. It’s a marketing issue, big time.” On Monday, Whitaker will prepare crudo of South American cobia, new to Seattle Fish distribution. “The texture is just amazing,” he says, adding that raw fish and oysters feature prominently on his menu at Cart Driver. “Now we’re using cobia all the time. We never use tuna; cobia is that switch. If I put a trash fish on the menu, then I’m training guests.” Adley learned the importance of focusing on high-quality, seasonal ingredients and sustainable seafood while cooking alongside rockstar chefs Ryan Hardy and Kyle Robinson at The Little Nell in the early 2000s. “Those two guys were absolute maniacs, they’d turn sardines into these mind-blowing little bites,” Adley marvels. “They’re these shitty little fish, but they would make them just…sexy. It was all about elevation of humble ingredients.” Other tastes at the six-course Chefs Collaborative Denver Trash Fish Dinner might include blue

catfish, amberjack, Arcadian redfish, and blood clams. Adley is toying with recipes for lionfish, snakehead, and sheepshead. “Snakehead carries some catfish qualities,” Adley says. “Steaky texture. It’s widely eaten in Thailand. Lionfish is totally invasive, but gorgeous. Sheepshead eat oysters and other shellfish so they get this wonderful minerality in their flesh. They’re super dorky looking, but really sweet. Sheepshead has a long and wonderful story in the US, and it’s a good barometer of our own ecosystem.” (New York City’s Sheepshead Bay was once rife with the namesake fish thanks to gigantic underwater oyster beds, but they began to disappear in the 1800s, mainly due to overfishing and pollution.) “It’s our responsibility — as chefs and consumers — to create a sustainable market,” Adley says. “Fads and comfort zones happen often in food. We don’t have a tremendous seafood culture, but it’s a really important one. There are serious issues going on with sustainability. It sucks. But it doesn’t suck as bad for us as it’s going to for our kids.” Amanda Rae…has gone fishing. amandaraewashere@gmail.com 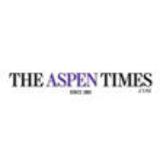 In this week's edition, we go skiing — yes, skiing...in summer! We also wine tasting Down Under, taste some trash fish, test drive the Ultim...

In this week's edition, we go skiing — yes, skiing...in summer! We also wine tasting Down Under, taste some trash fish, test drive the Ultim...