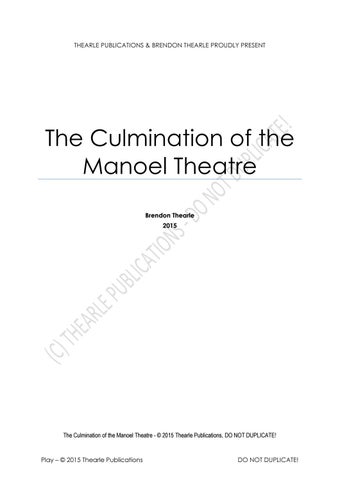 The Culmination of the Manoel Theatre Brendon Thearle 2015

The Culmination of the Manoel Theatre - © 2015 Thearle Publications, DO NOT DUPLICATE!

MATURE CONTENT WARNING: This play contains scenes that involve mature themes which include sexual themes, language and violence. If you are easily offended or easily disturbed, please do not read this play. This play is not intended for young audiences.

Scene 1 Scene opens in the police headquarters’ interrogation room. It is not like regular interrogation rooms, it is a well-lit room with a couch, a seat and a coffee table. We see Steven, the lone survivor of the recent Manoel Theatre massacre, sitting down on the couch Steven: Now this is something I'm really going to enjoy, if I could just get my character just right

In the back, we hear a person entering the interrogation room. It is Detective Morrison, the investigator in charge of the recent massacre. She enters with two cups of coffee Detective: So sorry for keeping you waiting. I hope you like coffee, because that’s the only thing we have

They both laugh, the detective hands one of the cups to Steven Detective: Careful, it might be hot Steven: (Stuttering) Thank you

They both drink some coffee Detective: Ah, I haven’t had a coffee all day! Hope yours is fine Steven: (Stuttering) Yes it is, thank you

Silence, the detective thinks on how she is going to strike up a conversation with Steven Detective: So… tell me a bit about the play you and your colleagues were going to perform, before that… ghastly event Steven: Well the play was going to be about these two young people who fall in love but one of the lovers has a deep dark secret which she doesn’t want to tell her lover about, so she… sadly kills him right where they first met Detective: Oh dear, that’s tragic Steven: Yeah Detective: And who were you going to play?

Steven thinks Steven: I was going to play the villain Detective: Oh, I love a good villain! They always give the plot line that little something extra Steven: Yes, I basically manipulate the girl into killing the boy so that he won’t find out her dark secret Detective: Hmm, sounded like an interesting play Steven: Yes… sadly, it will never be completed now… Detective: Yes, and it was almost opening night wasn’t it? Steven: Yeah, a day before we opened to the public Detective: Hmm, these disgusting people. Murdering innocent people for the fun of it and in one of the most prestigious theatres on the island! Steven: Yeah… Detective: I don’t blame you. So, can you please tell me everything… exactly how you saw the events at the theatre. Now if you forget something or need a break, just let me know. I won’t interrupt you unless I need some further explanation from your part, is that okay with you? Steven: Yes, that’s fine Detective: Okay, so while you’re recounting the events, I will be writing down some notes on my notepad. Whenever you’re ready…

Scene 2 Steven scratches his forehead; the detective listens to Steven but also writes down details on her notepad Steven: Well… where do I start? Well it was the middle of rehearsal week and I was sitting down taking a short break and Jessica, who was working on her solo scene, was up on stage. Everything was going just fine, Lucy was sitting on the stage’s steps helping Jessica whenever she messed up a line. I couldn’t help but notice someone, lurking in the

shadows, walking offstage. I couldn’t really tell, it was very odd, and then, I noticed that one of the spotlights that was shining on Jessica was flickering ever so slightly, then… a huge bang and a loud shriek could be heard and all of the theatre went dark. I could hear Lucy shouting and cursing at me to turn the house lights on. Once they were turned on, we could see one of the spotlights had fallen, right on Jessica, crushing her in the process, blood everywhere… it was a gruesome sight. And these so called ‘accidental occurrences’ just kept on happening over and over after that… Detective: Good god…

Scene 3 Steven: It was Lucy’s turn after that, and was it a horrible sight to see her lying down… dead. All I remember was that we were having our normal break not the short breaks like I mentioned before, this was a proper break. Lucy went to go and get a drink of water, she went backstage and her phone started ringing, we all called her to come and get her phone, she ran out, grabbed her phone, thanked us and went backstage, then we could hear someone gasping for air, we then heard a thud and a glass shatter, we all ran backstage and saw Lucy, pale in the face… dead on the floor. She was poisoned… Detective: Poisoned? Steven: Probably by the jug of water, someone must have put some form of poison in the water which made Lucy gasp for air Detective: And none of you thought of calling the police after this event? It certainly wasn’t accidental… Steven: Well, our director assured us that the police will be notified in due time Detective: But as far as I know, none of the police were informed of a poisoning at the Manoel… Steven: I guess he never called the police…

Detective: Carry on, you’re doing fine Steven: Oh, well... um… where was I? Detective: What happened after Lucy’s death? Who was the next victim? Steven: Well… after Lucy’s death, we were all getting slightly frantic Detective: Don’t blame you Steven: And, after Lucy’s terrible death, Malcolm was the next victim, and it wasn’t a pleasant sight to see either. We were practicing the scene in which the lovers fight one another Detective: Fight one another? Steven: Well, in the script it said that the boy found out that the girl was going to kill him Detective: How did he find out? Steven: Well… by me Detective: Ah, so you told him? Steven: In the play of course Detective: Of course! Steven: Anyway, we were watching Malcolm and Melanie doing their scene, which was the fight scene where they used knives Detective: Real knives? Steven: No, no. Fake ones Detective: Oh Steven: But… Detective: But? Steven: I did see someone go by the prop table. On the table we had the knives all ready for the fight scene, and I could see this hooded figure walk by them and then walk past. I didn’t take much notice of it; it could have been Malcolm or Melanie sorting out the props.

But what baffled me was what was going to happen, they were both doing their scene, and in the script it says that the girl, who was played by Melanie has to stab the boy, Malcolm in this case in the stomach and then she has the long epic monologue. But, after Melanie stabbed Malcolm in the stomach, we heard a loud yelp from him, which none of us took any notice. Melanie was doing her monologue and I couldn’t help but notice Malcolm looking at his stomach and seeing red dripping off his body, I was impressed I thought it was a blood pack to make the scene more realistic, and it really did! All I could see was Malcolm waving his other arm and pointing to his wound, we were all impressed but his acting, and then all of a sudden Malcolm falls on the floor with great force. Such terrific acting from his part, when Melanie finished her monologue and turned round. We all stood up and congratulated Malcolm for his realistic performance, but all we could see was Melanie shaking in shock, then we realised… those knives were in fact, actual sharp ones. Malcolm was stabbed to death by an actual knife… Detective: Oh my god… what a horrible way to die Steven: And a very slow death as well… Detective: No doubt about that

Scene 5 Steven: And then… Melanie’s turn… All I remember was her and I walking and she was shouting at me and telling me something I couldn’t quite being to fathom Detective: What? What was it that she was telling you? Steven: I… I can’t remember… Detective: Please try and remember! What she said could be vital information in catching the murderer Steven: I think it was something along those lines; she was talking about the murderer or something about him

Long pause. Steven looks out into the open Steven: I couldn’t stand her, always yapping away about something or someone, and now she was talking about this murderer, who was let loose around the theatre grounds. I had

to do it… I had to calm her down one way or another. She tried to run away, I don’t know why; she had fear in her eyes. All I could remember was my hands wrapping around her neck, slithering slowly, gripping tightly, and squeezing every bit of breath left in her. All the force of my once bloodied hands silencing the breath out of her. Slowly, she began to drift away. The last gasp of air was let out. I stood up and began to leave, but, I had to show some remorse to the now deceased Melanie, so I turned round and approached her, closed her eyes slowly, faced in front of her and gave her one last choke. As a token of my gratitude…

Scene 6 The detective realises what she has gotten into and unbuttons the gun case. As the sound of the button of the gun case is opened, Steven turns his eyes towards her and the his head slowly Steven: Oh dear… we are in trouble now

Long pause Detective: How did you get those scratches on your face Steven?

Long pause Steven: Why so quiet detective? Have we ended our session, or… is the murderer in this room? (Gasp) I think he is… sitting right next to us, detective. What should we do? Should we continue to act normal and continue our session? Or should we hunt down this murderer and put him to justice?

Long pause Steven: What gave the game away? Detective: (Cautious) You changed your narrative from the third person to the first person Steven: Tsk, tsk, tsk, silly me. Always a mistake of mine when I’m under interrogation conditions…

Detective: So… it was you all along wasn’t it? Steven: (Shocked) Now I didn’t say that, did I? You’re just making your own assumptions Detective: But… why? Steven: I couldn’t stand the sight of them. Any of them. So I muzzled each and every one of them… Now what should we do, detective?

The detective slowly gets out her gun ready to shoot. What she doesn’t realize is that the murderer also has a gun hidden behind his back Steven: Tick, tock, tick, tock. Time is running out detective…

Steven slowly moves towards the detective Steven: And when the clock strikes midnight… bang

Sudden blackout and a sound of a gun is heard

Did you know? That this play was only written in one whole day, finalizing it also took one whole day. This is the quickest written work the author has written so far… The Culmination of the Manoel Theatre

What happened after the Manoel Theatre massacre? Was the murderer captured? Did the police manage to find any evidence? It's time to go back...

The Culmination of the Manoel Theatre

What happened after the Manoel Theatre massacre? Was the murderer captured? Did the police manage to find any evidence? It's time to go back...