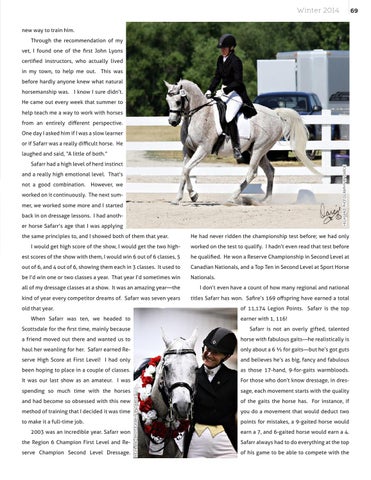 new way to train him. Through the recommendation of my vet, I found one of the first John Lyons certified instructors, who actually lived in my town, to help me out. This was before hardly anyone knew what natural horsemanship was. I know I sure didn’t. He came out every week that summer to help teach me a way to work with horses from an entirely different perspective. One day I asked him if I was a slow learner or if Safarr was a really difficult horse. He laughed and said, “A little of both.” HIGHLAND PHOTOGRAPHY BY DARCIE

Safarr had a high level of herd instinct and a really high emotional level. That’s not a good combination. However, we worked on it continuously. The next summer, we worked some more and I started back in on dressage lessons. I had another horse Safarr’s age that I was applying the same principles to, and I showed both of them that year.

He had never ridden the championship test before; we had only

worked on the test to qualify. I hadn’t even read that test before

est scores of the show with them, I would win 6 out of 6 classes, 5

he qualified. He won a Reserve Championship in Second Level at

Canadian Nationals, and a Top Ten in Second Level at Sport Horse

be I’d win one or two classes a year. That year I’d sometimes win

all of my dressage classes at a show. It was an amazing year—the

kind of year every competitor dreams of. Safarr was seven years

titles Safarr has won. Safire’s 169 offspring have earned a total

When Safarr was ten, we headed to

earner with 1, 116! Safarr is not an overly gifted, talented

a friend moved out there and wanted us to

horse with fabulous gaits—he realistically is

haul her weanling for her. Safarr earned Re-

serve High Score at First Level! I had only

and believes he’s as big, fancy and fabulous

been hoping to place in a couple of classes.

as those 17-hand, 9-for-gaits warmbloods.

It was our last show as an amateur. I was

For those who don’t know dressage, in dres-

spending so much time with the horses

sage, each movement starts with the quality

and had become so obsessed with this new method of training that I decided it was time to make it a full-time job. 2003 was an incredible year. Safarr won the Region 6 Champion First Level and Reserve Champion Second Level Dressage.

Scottsdale for the first time, mainly because 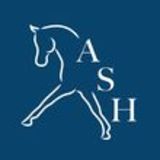