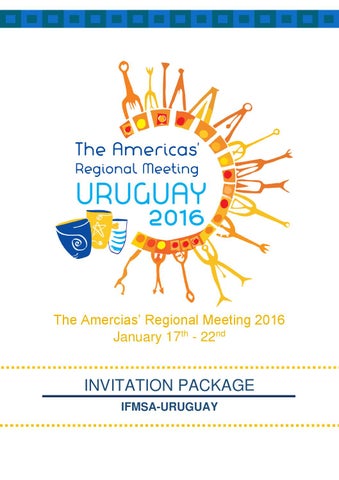 Message from the OC

On behalf of the OC, I am pleased to invite you, members of the IFMSA, to the Americas' Regional Meeting 2016. For the very first time Uruguay will open its doors to its beloved region. What some time ago used to be a dream, is now a reality. This story started with a simple question: “Why not?” And despite of the short time as a candidate member of the federation, our excitement and determination were big enough to work unwaveringly to make the dream come true. Now, after several months of work and as a proud full member of the IFMSA, we are ready to host one of the most important events of the region.

Uruguay has plenty to offer; the variety of landscapes, the great beaches, and some of the safest cities in the world, provide Uruguay the qualities to offer its visitors a magnificent experience. Besides its natural properties, Uruguay is ranked first in Latin America in democracy, peace, lack of corruption and quality of living. It is also regarded as one of the most liberal nations in the world due to social policies such as same-sex marriage and legal abortion.

With one of the best hotels of the city, a great venue provided by our main partner: the Uruguayan Physicians Union (SMU), standing committee sessions and workshops organized with absolute commitment; and expert professionals that will expose their vision on the elected Theme Event, we want all the delegates that arrive to our country to have an experience of a life time; the kind of experiences that our federation is used to offering us, in pursuance of “Empowering medical students in using their knowledge and capacities for the benefit of society”. Don´t miss the opportunity. Uruguay awaits you!

Theme: Health Equity “The Pan American Health Organization (PAHO) in October 2014 adopted a regional Strategy for Universal Access to Health and Universal Health Coverage, which expresses the commitment of PAHO Member States to strengthen health systems, expand access to comprehensive quality health services, provide financial protection, and adopt integrated, comprehensive policies to address the social determinants of health and health inequities.” Universal health coverage has been at the center of the global public health agenda in recent years. As one of the key goals of health systems, universal health coverage provides countries a way to fight against unmet needs and health inequities. Did you know that the Latin American region faces the greatest socioeconomic and health inequalities in the world? Despite the improvement in the recent years, there are still many differences among people’s health depending on their gender, where they live, their level of education, and whether they are rich or poor, etc. Health equity, universal health coverage and social determinants of health have been a major topic of the global health in the last years. Multiple stakeholders in the field of public health have been advocating the examination of policies and initiatives aimed at achieving health equity and universal health coverage. IFMSA, as the biggest medical students’ organization worldwide, must be part of the process. Our Theme Event will introduce professionals with vast experience in the field of public health, giving the attendants the opportunity to acquire a deep outlook on the subject.

URUGUAY Uruguay, officially RepĂşblica Oriental del Uruguay, is a country in the southeastern region of South America. It is bordered by Argentina to its west and Brazil to its north and east, with the Atlantic Ocean to the south and southeast. Uruguay is home to 3.3 million people, of whom 1.8 million live in the metropolitan area of its capital and largest city, Montevideo. With an area of approximately 176,000 square kilometers, Uruguay is geographically the second-smallest nation in South America after Suriname. Temperate weather characterizes the climate of Uruguay, meaning that extreme heat or cold is uncommon. Summer in Uruguay runs from December to March, with temperatures that rise to 25-30Â°C. With one of the lowest indexes of contamination in the planet and an increasing number of protected areas and flora and fauna reserves, Uruguay offers a great variety of natural landscapes. Uruguay has a high standard of living and is considered one of the safest countries in the world. Furthermore, it is ranked first in Latin America in democracy, peace, lack of corruption and quality of living. It is also regarded as one of the most liberal nations in the world due to social policies such as same-sex marriage and legal abortion.

Travel Information Carrasco International Airport With a brand new building, the Carrasco International Airport is one of the worldÂ´s most modern airport. There are three bus companies and several private taxi and remise services connecting the airport with Montevideo. The trip time to Montevideo by car is approximately 20 minutes, while by bus it is 1 hour and 15 minutes. Airport Transportation from the Airport to Montevideo will not be provided by the OC, official airport shuttles are recommended. This shuttle costs USD 12 (price subject to adjustments).

oneworld is the official airline alliance of The Americasâ&#x20AC;&#x2122; Regional Meeting

attendee benefits • Attractive flight discounts for attendees and one travel companion. • Flights available from all oneworld member airlines and affiliates. • User-friendly booking tool that will display the most convenient flights and multiple fare options. • 24-hour support desk – reach us by email or phone. • Earn rewards and tier status points on oneworld eligible flights. • Frequent flyer privileges, including, for top tier cardholders, access to some 600 premium airport lounges worldwide, fasttrack at security lanes in selected airports and extra baggage allowance. • Seamless connections and quality service on oneworld member airlines. Visit www.oneworld.com/events and enter event code OW68C15 to log in as an attendee and access our convenient online booking tool, customised with your event information. You and a travel companion can then book discounted flights for travel seven days before and seven days after the event. Fares will be available up to twelve months prior to the event. For more information please visit www.oneworld.com

PRE-REGIONAL MEETING MALDONADO | URUGUAY January 14th- 17th The Pre - Regional Meeting will be held in the department of Maldonado, located in the east of the country and only 82 km away from Montevideo, the capital city. Maldonado is one of the most touristic departments of Uruguay, with important architectural places well known internationally, whereas the shore provides visitors with countless experiences in dazzling natural scenery. It is home to one of the worldÂ´s most exclusive destinations: Punta del Este.

Accommodation & Venue The accommodation during the Pre - Regional Meeting will be at the summer camp of the SMU, the Alcion Hotel. It is located in SolĂ­s surrounded by a wide range of natural landscapes, only 50km away from the city of Punta del Este.

The hotel offers comfortable double and triple rooms from which you can appreciate the beautiful sunset characteristic of the Uruguayan coast. Guests, moreover, will be able to enjoy amenities like an open pool, heated pool, tennis court on the beach, football field, fishing and gym and spa services.

Regional Meeting MONTEVIDEO | URUGUAY January 17th- 22nd Montevideo, the capital of the country, with 1.3 milllion inhabitants, was chosen as capital of the MERCOSUR due to its strategic location, its peacefulness and its safety. It also counts with a great historical background, craft markets, shopping malls, culture, art and gastronomic variety.

In 2013, for the second time, Montevideo was named the Ibero-American Culture Capital by the Union of the Ibero-American Capital Cities (UCCI Unión de Ciudades Capitales Iberoamericanas). Its theatrical productions are remarkably extensive and varied, and include classic, modern and alternative shows. In its museums, cultural centers and showrooms, it is possible to appreciate the art of a wide range of internationally recognised artists such as Juan Manuel Blanes, Rafael Barradas, Pedro Figari, Joaquín Torres García, José Cúneo and Ignacio Iturria, among others.

It is located in the South center of the country where 30 km of coastline make up one of the main attributes of the city, the Rambla of Montevideo. In addition, the vast number of green spaces, parks and gardens also provide numerous outdoor options.

Accommodation The Vivaldi and the Punta Trouville are two 4-stars hotels that are just a few blocks away from each other. These hotels are located in Punta Carretas, one of the most privileged neighborhoods of Montevideo, meters away from Punta Carretas Shopping and the Montevideo Golf Club and only 10 minutes from the World Trade Center Free Zone, in an exclusive environment surrounded by restaurants and recreation centers and just a few blocks from the Montevideoâ&#x20AC;&#x2122;s Rambla.

Rooms The Vivaldi and The Punta Trouville count with 94 and 56 rooms respectively. Both are equipped with air conditioning, LED TV, minibar, security box, work desk and wireless internet access at no additional cost.

6 Rooms will be available, all equipped with projectors / TV and materials needed for the sessions.

Meals Meals will be served both at the hotel or venue. *Vegetarian food should be requested in advance during registrations.

Uruguayan Cuisine Uruguayan cuisine is traditionally based on its Indigenous Charrua and European roots, in particular, European food from Italy, Spain, Portugal and France, but also from countries such as Germany and Britain. Many foods from those countries such as pasta, sausages, and desserts are common in the nation's diet. The Uruguayan barbecue, asado, is one of the most exquisite and famous in the world. A sweet paste, dulce de leche, is used to fill cookies, cakes, pancakes, milhojas, andalfajores.

There are several traditional foods you should not miss if you visit Uruguay:   

Asado: both the tradition of grilling beef over coals (which translates to barbecue in American English), and the dish, "tira de asado". Chivito: is a sandwich containing steak, ham, cheese, tomato, lettuce, egg, bacon, onion, pepper and mayonnaise. Choripán is a very popular Uruguayan fast food: A grilled chorizo and a crusty bread such as a baguette, usually served with chimichurri sauce.

Empanada: a small pie or turnover, most commonly filled with meat or ham and cheese.

Fainá: a mix of chickpea flour, salt, water and olive oil, originally called "farinata", cooked like a pizza on a flat tray. Brought by immigrants from Liguria (Italy). Pancho: the typical Uruguayan hot dog: a bun called "pan de Viena" filled with a "Frankfurter" with mustard, ketchup, mayonnaise or "salsa golf" on top. Gnocchi (known as "ñoquis") is traditionally eaten on the 29th day of each month. This was the day before payday, when people were at their poorest. Gnocchi made a cheap and hearty meal. On these occasions, some people leave a coin or a banknote under the plate to attract prosperity. Milanesa: a thin breaded cutlet steak. There is a great variety, such as: Milanesa Napolitana or Milanesa Rellena. Pastel de carne: in English: meat pie. Chopped meat, mashed potato, green peppers, olives, and eggs.

FEES The OC will accept 16 participants per NMO: 8 early and 8 late.

REGISTRATIONS Registrations will be made through the SMU´s website www.smu.org.uy Instructions to NMO Presidents will be sent by the Registration & Visa Coordinator prior to the start of registration.

PAYMENTS Bank information will be included in the Invoices. Type of Payment

*We will accept only one transfer per NMO in both types of payments.

SUBSTITUTIONS Substitution Any regardless of gender

The logo contains a sun, representing the sun of our national flag. This sun, known as Sol de Mayo, refers to the independence from Spain of the RĂ­o de la Plata during de Mayo revolution. The three drums: chico, repique and piano drums represent the Uruguayan candombe. Candombe is a Uruguayan music and dance style originating with African slaves. It is considered an important aspect of the culture of Uruguay and was recognized by UNESCO as a World Cultural Heritage of humanity.