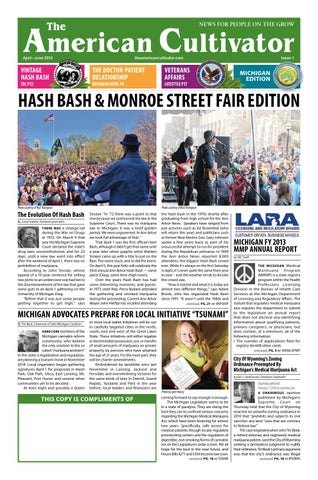 The Evolution Of Hash Bash By Larry Gabriel, Freelance journalist

There was a strange lull during the War on Drugs in 1972. On March 9 that year the Michigan Supreme Court declared the state’s drug laws unconstitutional, and for 22 days, until a new law went into effect after the weekend of April 1, there was no prohibition of marijuana. According to John Sinclair, whose appeal of a 10-year sentence for selling two joints to an undercover cop had led to the disembowelment of the law that gave some guts to an April 1 gathering on the University of Michigan Diag. “Before that it was just some people getting together to get high,” says

Sinclair. “In ’72 there was a point to that one because we overturned the law in the Supreme Court. There was no marijuana law in Michigan; it was a brief golden period. We were ungoverned. In Ann Arbor we took full advantage of that.” That April 1 was the first official Hash Bash, although it didn’t get that name until a year later when graphic artist Walden Simper came up with a title to put on the flyer. The name stuck, and so did the event. On April 5, this year folks will celebrate the 43rd annual Ann Arbor Hash Bash — same place (Diag), same time (high noon). Over the years Hash Bash has had some interesting moments, and guests. In 1973 state Rep. Perry Bullard attended the gathering and smoked marijuana during the proceeding. Current Ann Arbor Mayor John Hieftje has recalled attending

the hash bash in the 1970s shortly after graduating from high school for the Ann Arbor News. Speakers have ranged from pot activists such as Ed Rosenthal (who will return this year) and politicians such as former New Mexico Gov. Gary Johnson spoke a few years back as part of his unsuccessful attempt to run for president during the Republican primaries. In 1999 the Ann Arbor News reported 8,000 attendees, the biggest Hash Bash crowd ever. While it’s always on the first Saturday in April, it’s never quite the same from year to year – and the weather tends to dictate the crowd size. “How it started and what it is today are almost two different things,” says Adam Brook, who has organized Hash Bash since 1991. “It wasn’t until the 1980s and continued, PG. 21 see HASH Bash

Hard core members of the Michigan cannabis reform community, who believe the only solution to the so called "marijuana problem" in this state is legalization and regulation, are planning a tsunami move in November 2014. Local organizers began gathering signatures April 1 for proposals in Hazel Park, Oak Park, Utica, East Lansing, Mt. Pleasant, Port Huron and several other communities yet to be decided. At least eight and possibly a dozen

or more local ballot initiatives will be run in carefully targeted cities in the north, south, east and west of the Great Lakes State. These initiatives will either legalize or decriminalize possession, use, or transfer of small amounts of marijuana on private property by persons who have attained the age of 21 years. For the most part, they will be charter amendments. Emboldened by landslide wins last November in Lansing, Jackson and Ferndale, and overwhelming victories for the same kinds of laws in Detroit, Grand Rapids, Ypsilanti and Flint in the year before, local leaders and financiers are

This Copy is compliments of

The Michigan Medical Marihuana Program (MMMP) is a state registry program within the Health Professions Licensing Division in the Bureau of Health Care Services at the Michigan Department of Licensing and Regulatory Affairs. The statute that regulates medical marijuana also requires the department to submit to the legislature an annual report that does not disclose any identifying information about qualifying patients, primary caregivers, or physicians, but does contain, at a minimum, all of the following information: • The number of applications filed for registry identification cards.

coming forward to say enough is enough. The Michigan Legislature seems to be in a state of paralysis. They are doing the best they can to confront serious concerns regarding the Michigan Medical Marijuana Act, which have been festering for almost two years. Specifically, safe access for medical patients though locally regulated provisioning centers and the regulation of digestible, non smoking forms of cannabis are on the Legislatures radar screen. We all hope for the best in the near future, and House Bills 4271 and 5104 become law soon.

Originally published: February 7, 2014 on examiner.com A unanimous opinion published by Michigan’s Supreme Court on Thursday held that the City of Wyoming enacted an unlawful zoning ordinance in 2010 that “prohibits and subjects to civil sanction any land “uses that are contrary to federal law.” The case originated when John Ter Beek, a retired attorney and registered medical marijuana patient, sued the City of Wyoming seeking a declaratory judgment to nullify their ordinance. Ter Beek’s primary argument was that the city’s ordinance was illegal 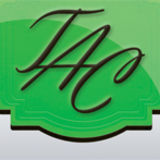