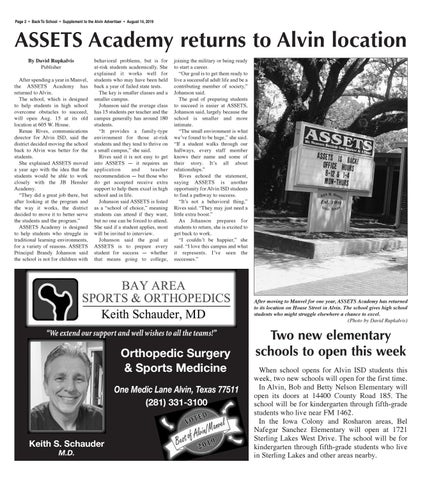 ASSETS Academy returns to Alvin location By David Rupkalvis Publisher After spending a year in Manvel, the ASSETS Academy has returned to Alvin. The school, which is designed to help students in high school overcome obstacles to succeed, will open Aug. 15 at its old location at 605 W. House. Renae Rives, communications director for Alvin ISD, said the district decided moving the school back to Alvin was better for the students. She explained ASSETS moved a year ago with the idea that the students would be able to work closely with the JB Hensler Academy. “They did a great job there, but after looking at the program and the way it works, the district decided to move it to better serve the students and the program.” ASSETS Academy is designed to help students who struggle in traditional learning environments, for a variety of reasons. ASSETS Principal Brandy Johanson said the school is not for children with

behavioral problems, but is for at-risk students academically. She explained it works well for students who may have been held back a year of failed state tests. The key is smaller classes and a smaller campus. Johanson said the average class has 15 students per teacher and the campus generally has around 180 students. “It provides a family-type environment for those at-risk students and they tend to thrive on a small campus,” she said. Rives said it is not easy to get into ASSETS — it requires an application and teacher recommendation — but those who do get accepted receive extra support to help them excel in high school and in life. Johanson said ASSETS is listed as a “school of choice,” meaning students can attend if they want, but no one can be forced to attend. She said if a student applies, most will be invited to interview. Johanson said the goal at ASSETS is to prepare every student for success — whether that means going to college,

joining the military or being ready to start a career. “Our goal is to get them ready to live a successful adult life and be a contributing member of society,” Johanson said. The goal of preparing students to succeed is easier at ASSETS, Johanson said, largely because the school is smaller and more intimate. “The small environment is what we’ve found to be huge,” she said. “If a student walks through our hallways, every staff member knows their name and some of their story. It’s all about relationships.” Rives echoed the statement, saying ASSETS is another opportunity for Alvin ISD students to find a pathway to success. “It’s not a behavioral thing,” Rives said. “They may just need a little extra boost.” As Johanson prepares for students to return, she is excited to get back to work. “I couldn’t be happier,” she said. “I love this campus and what it represents. I’ve seen the successes.”

After moving to Manvel for one year, ASSETS Academy has returned to its location on House Street in Alvin. The school gives high school students who might struggle elsewhere a chance to excel. (Photo by David Rupkalvis)

“We extend our support and well wishes to all the teams!”