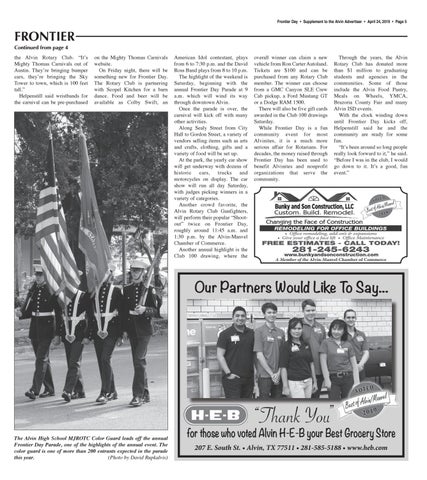 FRONTIER Continued from page 4 the Alvin Rotary Club. “It’s Mighty Thomas Carnivals out of Austin. They’re bringing bumper cars, they’re bringing the Sky Tower to town, which is 100 feet tall.” Helpenstill said wristbands for the carnival can be pre-purchased

on the Mighty Thomas Carnivals website. On Friday night, there will be something new for Frontier Day. The Rotary Club is partnering with Scopel Kitchen for a barn dance. Food and beer will be available as Colby Swift, an

American Idol contestant, plays from 6 to 7:30 p.m. and the David Ross Band plays from 8 to 10 p.m. The highlight of the weekend is Saturday, beginning with the annual Frontier Day Parade at 9 a.m. which will wind its way through downtown Alvin. Once the parade is over, the carnival will kick off with many other activities. Along Sealy Street from City Hall to Gordon Street, a variety of vendors selling items such as arts and crafts, clothing, gifts and a variety of food will be set up. At the park, the yearly car show will get underway with dozens of historic cars, trucks and motorcycles on display. The car show will run all day Saturday, with judges picking winners in a variety of categories. Another crowd favorite, the Alvin Rotary Club Gunfighters, will perform their popular “Shootout” twice on Frontier Day, roughly around 11:45 a.m. and 1:30 p.m. by the Alvin-Manvel Chamber of Commerce. Another annual highlight is the Club 100 drawing, where the

overall winner can claim a new vehicle from Ron Carter Autoland. Tickets are $100 and can be purchased from any Rotary Club member. The winner can choose from a GMC Canyon SLE Crew Cab pickup, a Ford Mustang GT or a Dodge RAM 1500. There will also be five gift cards awarded in the Club 100 drawings Saturday. While Frontier Day is a fun community event for most Alvinites, it is a much more serious affair for Rotarians. For decades, the money raised through Frontier Day has been used to benefit Alvinites and nonprofit organizations that serve the community.

Through the years, the Alvin Rotary Club has donated more than $1 million to graduating students and agencies in the communities. Some of those include the Alvin Food Pantry, Meals on Wheels, YMCA, Brazoria County Fair and many Alvin ISD events. With the clock winding down until Frontier Day kicks off, Helpenstill said he and the community are ready for some fun. “It’s been around so long people really look forward to it,” he said. “Before I was in the club, I would go down to it. It’s a good, fun event.”

The Alvin High School MJROTC Color Guard leads off the annual Frontier Day Parade, one of the highlights of the annual event. The color guard is one of more than 200 entrants expected in the parade this year. (Photo by David Rupkalvis)