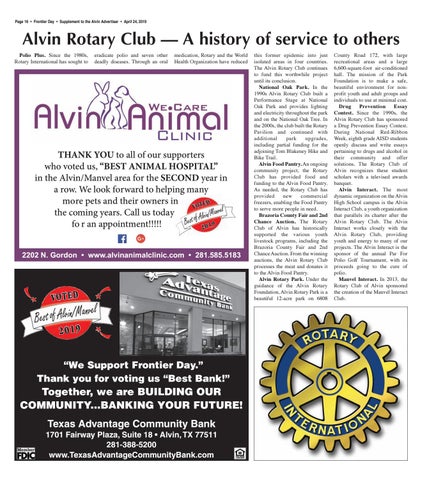 Alvin Rotary Club — A history of service to others Polio Plus. Since the 1980s, Rotary International has sought to

eradicate polio and seven other deadly diseases. Through an oral

medication, Rotary and the World Health Organization have reduced

“We Support Frontier Day.” Thank you for voting us “Best Bank!”

County Road 172, with large recreational areas and a large 6,600-square-foot air-conditioned hall. The mission of the Park Foundation is to make a safe, beautiful environment for nonprofit youth and adult groups and individuals to use at minimal cost. Drug Prevention Essay Contest. Since the 1990s, the Alvin Rotary Club has sponsored a Drug Prevention Essay Contest. During National Red-Ribbon Week, eighth grade AISD students openly discuss and write essays pertaining to drugs and alcohol in their community and offer solutions. The Rotary Club of Alvin recognizes these student scholars with a televised awards banquet. Alvin Interact. The most dynamic organization on the Alvin High School campus is the Alvin Interact Club, a youth organization that parallels its charter after the Alvin Rotary Club. The Alvin Interact works closely with the Alvin Rotary Club, providing youth and energy to many of our projects. The Alvin Interact is the sponsor of the annual Par For Polio Golf Tournament, with its proceeds going to the cure of polio. Manvel Interact. In 2013, the Rotary Club of Alvin sponsored the creation of the Manvel Interact Club.