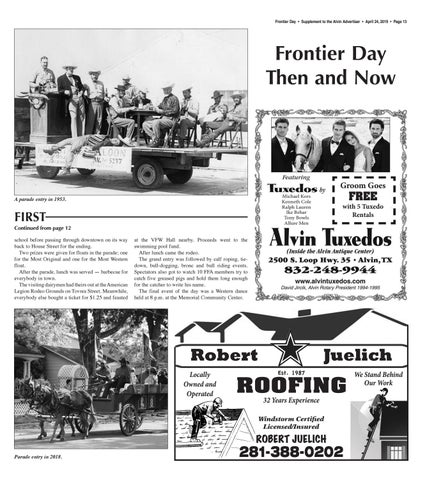 Frontier Day Then and Now

FIRST Continued from page 12 school before passing through downtown on its way back to House Street for the ending. Two prizes were given for floats in the parade; one for the Most Original and one for the Most Western float. After the parade, lunch was served — barbecue for everybody in town. The visiting dairymen had theirs out at the American Legion Rodeo Grounds on Tovrea Street. Meanwhile, everybody else bought a ticket for $1.25 and feasted

at the VFW Hall nearby. Proceeds went to the swimming pool fund. After lunch came the rodeo. The grand entry was followed by calf roping, tiedown, bull-dogging, bronc and bull riding events. Spectators also got to watch 10 FFA members try to catch five greased pigs and hold them long enough for the catcher to write his name. The final event of the day was a Western dance held at 8 p.m. at the Memorial Community Center.

We Stand Behind Our Work