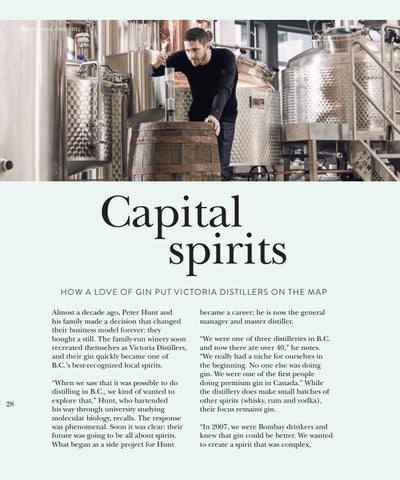 Capital spirits HOW A LOVE OF GIN PUT VICTORIA DISTILLERS ON THE MAP Almost a decade ago, Peter Hunt and his family made a decision that changed their business model forever: they bought a still. The family-run winery soon recreated themselves as Victoria Distillers, and their gin quickly became one of B.C.’s best-recognized local spirits.

“When we saw that it was possible to do distilling in B.C., we kind of wanted to explore that,” Hunt, who bartended his way through university studying molecular biology, recalls. The response was phenomenal. Soon it was clear: their future was going to be all about spirits. What began as a side project for Hunt

became a career; he is now the general manager and master distiller. “We were one of three distilleries in B.C. and now there are over 40,” he notes. “We really had a niche for ourselves in the beginning. No one else was doing gin. We were one of the first people doing premium gin in Canada.” While the distillery does make small batches of other spirits (whisky, rum and vodka), their focus remains gin. “In 2007, we were Bombay drinkers and knew that gin could be better. We wanted to create a spirit that was complex,

B.C.’s only magazine dedicated to local distilleries and cocktail culture is back with a winter issue filled with lively commentary and useful tips to inject a little spirit (or two) into the holidays. Our team includes award-winning writers and mixologists passionate about liquor, from how it’s made, to how it can be used. We look at current trends, the history of classic cocktails, and offer original recipes for you to wow your friends and family with at home. We also provide a full list of B.C distillery listings, with independent tasting notes provided by our panel of renowned local experts. The Alchemist can be found at independent liquor stores, select bars and restaurants, and at any B.C. distillery listed. 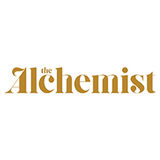