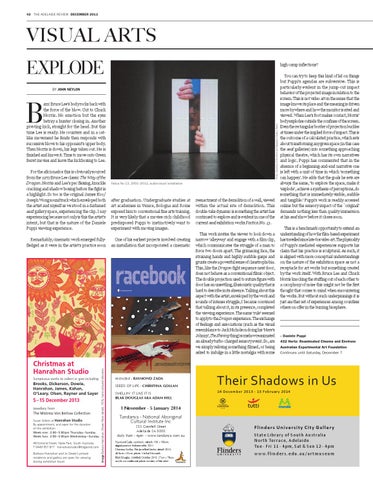 For the aficionados this is obviously sourced from the 1972 Bruce Lee classic The Way of the Dragon. Norris and Lee’s pec flexing, knuckle cracking and shadow boxing before the fight is a highlight. So too is the original James Koo/ Joseph Wong soundtrack which enveloped both the artist and myself as we stood in a darkened aeaf gallery space, experiencing the clip. I say experiencing because not only is this the artist’s intent, but that is the nature of the Daniele Puppi viewing experience.

Christmas at Hanrahan Studio Sumptuous works to collect or give including

Remarkably, cinematic work emerged fullyfledged as it were in the artist’s practice soon

Photo: Courtesy of the artist and Magazzino Gallery, Rome.

am! Bruce Lee’s body rocks back with the force of the blow. Cut to Chuck Norris. No emotion but the eyes betray a hunter closing in. Another pivoting kick, straight for the head. But this time Lee is ready. He counters and in a catlike movement he fends then responds with successive blows to his opponent’s upper body. Then Norris is down, his legs taken out. He is finished and knows it. Time to move onto Green Beret movies and leave the kickboxing to Lee.

after graduation. Undergraduate studies at art academies in Venice, Bologna and Rome exposed him to conventional fine arts training. It is very likely that a movies-rich childhood predisposed Puppi to instinctively want to experiment with moving images. One of his earliest projects involved creating an installation that incorporated a cinematic

reenactment of the demolition of a wall, viewed within the actual site of demolition. This double-take dynamic is something the artist has continued to explore and is evident in one of the current aeaf exhibition works Factica No. 13. This work invites the viewer to look down a narrow ‘alleyway’ and engage with a film clip, which communicates the struggle of a man to force two doors apart. The grimacing face, the straining hands and highly audible gasps and grunts create a powerful sense of claustrophobia. This, like the Dragon fight sequence next door, does not behave as a conventional filmic object. The double projection used to suture figure with door has an unsettling, illusionistic quality that is hard to describe in its absence. Talking about this aspect with the artist, enveloped by the work and sounds of intense struggle, I became convinced that talking about it, in its presence, completed the viewing experience. The same ‘rule’ seemed to apply to the Dragon experience. The exchange of feelings and associations (such as the visual resemblance to Jack Nicholson doing his ‘Here’s Johnny’, The Shining thing) somehow reanimated an already turbo-charged sensory event. So, are we simply reliving something filmed, or being asked to indulge in a little nostalgia with some

You can try to keep this kind of lid on things but Puppi’s agendas are subversive. This is particularly evident in the jump-cut impact behavior of the projected image in relation to the screen. This is not video art in the sense that the image knows its place and the meaning is driven more by where and how the monitor is sited and viewed. When Lee’s foot makes contact, Norris’ body explodes outside the confines of the screen. Even the rectangular border of projection buckles at times under the implied force of impact. This is the outcome of a calculated practice, which sets about transforming any given space (in this case the aeaf galleries) into something approaching physical theatre, which has its own narratives and logic. Puppi has commented that in the absence of a beginning-and-end narrative one is left with a unit of time in which ‘something can happen’. He adds that the goals he sets are always the same, ‘to explore the space, make it ‘explode’, achieve a synthesis of perceptions, do something that is immediately visible, audible and tangible.’ Puppi’s work is readily accessed online but the sensory impact of the `original’ demands nothing less than quality immersion at his aeaf show before it closes soon. This is a benchmark opportunity to extend an understanding of how far film-based experiment has travelled since late 60s video art. The physicality of Puppi’s mediated experiences supports his claim that his practice is sculptural. As such, it is aligned with more conceptual understandings on the nature of the exhibition space as not a receptacle for art works but something created by the work itself. With Bruce Lee and Chuck Norris knocking the stuffing out of each other to a cacophony of noise this might not be the first thought that comes to mind when encountering the works. But without such underpinnings it is just another set of experiences among countless others on offer in the buzzing biosphere.