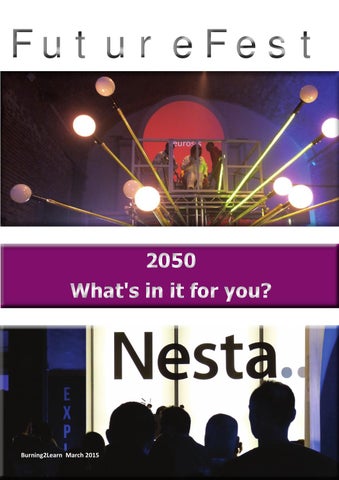 Welcome to FutureFest 2015 has just marked the return of Nesta’s momentous FutureFest Event. The curiosity-quirking weekend was exploding at the seams with fresh ideas and technologies, each oozing with the vibrancy and amazement of our coming future.

Nesta Chief Executive, Geoff Mulgan, kicked the weekend off by expressing his vision:

“We want people to leave Futurefest fascinated about the future, but also better prepared to shape it.”

‘Look into the future and make it your own!’ Take a look at some of FutureFest’s ideas of the future and see what you think life will be like in 2050...

Have your say Q1: What would make you vote? Q2: If your community was offered Future of Democracy was the first topic of discussion for FutureFest, following an opening keynote presentation from Baroness Helena Kennedy QC. Baroness Kennedy put forward a very clear and powerful message about trust. She expressed her view that trust needs to be placed in the centre of all things, and explained that politicians are not the only people in control of solving societies problems and that some of the power lays elsewhere. Baroness Kennedy also conveyed that she would vote for Federalism in society. This comment was challenged from the floor by a participant that put forward the view that ‘politicians should not follow party whips, but aim to deliver what their constituents want through stronger debates.’

2 million pounds, what would you want them to spend it on?

Q3: What do ten year olds need to

be learning now, to help them in their future?

Q4: What jobs are needed for our

Q5: Can you think of any examples

of the ‘new skills’ that young people will need for the 21st century?

Q6: Do you think young people will

stop learning to drive once driverless cars come into existence?

Q7: What kinds of products do you

think 3D printers will be offering in five years time?

Dr Michael Osborne of Martin Oxford School has been looking into ‘jobs of the future’ and was keen to share some of his research with FutureFest. Dr Osborne shared some examples of the major areas that will experience change in the world of work. One example of this is the mining industry in Australia; As vehicles start to become automated and driver-less, the need for all of the drivers in this sector will rapidly decline! Replacing a $120,000 driver with a driver-less truck will fully stretch the CSR of many mining companies and the communities they work in. Can you tell us why?

Q8: How many jobs can you think

of that will be created and lost by an increase in 3D printing?

Q9: How much do you think four

Q10: Why do you think Coca Cola Author John Lanchester asked FutureFest ‘can we trust the bearer of this bank note?’ In 2007 the M-Pesa currency was formed in Kenya and by 2013 it was responsible for 25% of Kenya’s GDP. Two years later it has now reached the equivalent of 50% of the GDP. How did this happen? Why is it that Kenya has led the way with mobile payment? John also discussed the ways that money will be moving around in 2050 - do you have any ideas?

are exploring the possibilities for water as a drinks product of theirs in the future?

Try debating these questions with your teacher/lecturer and help shape the future! Please send us your ideas at schools@burning2learn.co.uk

Once again, Dr. Morgane Gaye opened our eyes to the insatiable future of food as she explored a whole host of topics; from fascinating insights into edible packaging to scrumptious sweets that will release their fruity flavours by reacting with your saliva. We’ve got some bad news for all you chocolate lovers out there as researchers estimate that the price of a small four piece chocolate bar may go up to a staggering £10! But it’s not all bad news as Coca Cola announce plans to look into types of water for its drinks of the future.

Welcome to the Debate!

Welcome to the Debate Chamber at Vinopolis London where your mind and senses will be unlocked and bucket loads of knowledge will be embedded in your brain. The art is to link aspirations and dreams into the reality of this world. As the world speeds up innovation is coming thick and fast.

Weekends like FutureFest encourage you to talk with some of the world’s deepest thinkers. The downside is that a lot of people don’t think they have the time to listen and think they have to just react.

A panelist referred to a recent quote by Martin Wolf, Chief Economics Commentator for the Financial Times, who boldly said that he was working on polices for after the next financial crash.

One debate that we found very thought-provoking was ‘How much Economic Turmoil Can We Predict or Prepare For?’

We will be recommending that students read a few of Mr Wolf’s articles and get the debate going for themselves! The debates should include proposed practical action based solutions.

“Spending less than 30 minutes a week listening to others may help you miss the next credit crises or dream up the next bit of fun that the internet can release on the world.” How do we rebuild trust and develop a new way of thinking that places others as equals?

Other interesting sound-bites: It was fascinating to hear about how Professor Brendan Walker of the Thrill Laboratory, is working on technologies which enhance mind-control gaming. Professor Brendan is described as the world’s only ‘thrill engineer’. We also head from Professor Cheok who spoke about his stunning work that uses all of our senses - to include taste, touch and smell - to enhance online communication. These are yet more energising and inspiring people worth following!

Start to the debate in your city by finding out more at www.futurefest.org

The next debate discussed ‘Economic turmoil’ and panelist Fran Boiat, Positive Money, asked, ‘why can’t we have a money system that serves people and planet?’ We need to research Positive Money’s views a little deeper as the structure of money is fundamental to our society! So again how do we encourage change if that is the right thing to do? It is said that only if people really want to change, will it change. As a society we have to make the decision ourselves and not rely on others.

As this world is changing so fast we have to look at employment and skills a little more closely. Just over 200 hundred years ago, the combustion engine was created. At the time all of those working with horses and carriages did not welcome this change. Some 60 years later a new job was created which involved walking in front of the car waving a red flag for safety. Would anyone in that era ever have thought that they will one day do away with the driver? Perhaps we should all be mindful of our coming future - would it be wise to start training as a driving instructor, for example? Who knows, Bill Gates under estimated the internet.

Could this approach be the answer? 1. Need before greed 2 Service before status 3 Reflect on failure and successes of the past

How can robots help you? Louis Philippe Demers created Blind Robot, an interactive robotics artwork. Without dialogue we were invited to meet this amazing creation. As the robot delicately explored our faces the interaction sent shivers down our spines as this act mirrored that of a blind person. MI.MU gloves showed us how technology is being linked to our bodies. Now, we’ve all taken to the stage in the refines of our bedrooms and waved our conductor’s baton to the beat... what if those same arm movements could actually control the beat, tempo and pitch of the music we were listening to? Artists Chagall and Daniel Mulhern demonstrated the power of a pair gloves that allow an individual to make music through movements. They were able to decide the sounds that they created through a combination of the movement in their gloves and some very clever software! Just like magic, the sound appears as you move your hands. Absolutely phenomenal!

My Robot Companion was yet another mind blowing experience for FutureFest. This project was created by Anna Dumitriu and Alex May and explores social-robotics.

George Clinton energised the room as he took us all on a trip back in time. You may think this is strange for a futuristic show, but we think it was a master stroke. Can you believe how far we have come in 40 years? You may not enjoy George’s music, but you’ve got to love his approach to life!

My Robot Companion is able to take on the appearance of any human face. Once again, participants beamed with delight through the integration. To be able to see your own features reconstructed on a real robot was incredible. It even has the capacity to combine features from multiple faces, which created a sense of bonding within the room.

George took a range of serious issues that were very heavy concerns within society at the time, and transformed attitudes towards them through his music. His approach allowed us to face these issues with a level head whilst feeling energised and entertained - two feelings you wouldn’t typically associate with these topics! It’s well worth checking out his album ‘One nation under a groove’ to get a real idea of his accomplishments! His infectious love of life encouraged his audience to have a laugh and enjoy ourselves. He said, ‘If you do something you love that’s great - and if you get paid for it it’s a bonus!’

A golden sound-bite exclusive! Edward Snowden challenged us all to stop state surveillance and protect the freedom of the world’s citizens. In a powerful talk via video link from Moscow, he laid out his reasons for opposing heavy surveillance, calling for us not to sleepwalk into a mass surveillance world... How would you respond to his comments?

Fashion Designer Vivienne Westwood urged more people to speak out against all of the companies with unethical supply chains. The environmental activist said that public debate must ‘grow, accelerate and intensify’ in order to do more to stop the harmful effects of “vulture capitalism”. She expressed her views that companies cannot be allowed to continue to exploit the world’s natural resources and growing population.

How do we rebuild trust throughout our communities? How can you add value to your street?

Let us know what you think via schools@burning2learn.co.uk

Checkout their FutureFest videos, start the debate and see What you can come up with. Moving forward will happen, but only if we can all talk and listen. The answers you come up with are the first step, but they must be followed up by an action to set them in motion!