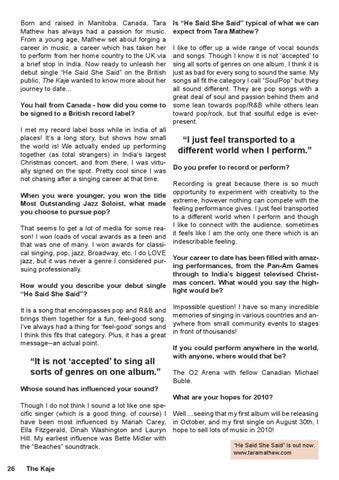 Born and raised in Manitoba, Canada, Tara Mathew has always had a passion for music. From a young age, Mathew set about forging a career in music, a career which has taken her to perform from her home country to the UK via a brief stop in India. Now ready to unleash her debut single “He Said She Said” on the British public, The Kaje wanted to know more about her journey to date...

Is “He Said She Said” typical of what we can expect from Tara Mathew?

I like to offer up a wide range of vocal sounds and songs. Though I know it is not ‘accepted’ to sing all sorts of genres on one album, I think it is just as bad for every song to sound the same. My songs all ﬁt the category I call “SoulPop” but they all sound different. They are pop songs with a great deal of soul and passion behind them and You hail from Canada - how did you come to some lean towards pop/R&B while others lean toward pop/rock, but that soulful edge is everbe signed to a British record label? present. I met my record label boss while in India of all places! It’s a long story, but shows how small “I just feel transported to a the world is! We actually ended up performing different world when I perform.” together (as total strangers) in India’s largest Christmas concert, and from there, I was virtually signed on the spot. Pretty cool since I was Do you prefer to record or perform? not chasing after a singing career at that time. Recording is great because there is so much When you were younger, you won the title opportunity to experiment with creativity to the Most Outstanding Jazz Soloist, what made extreme, however nothing can compete with the feeling performance gives. I just feel transported you choose to pursue pop? to a different world when I perform and though That seems to get a lot of media for some rea- I like to connect with the audience, sometimes it feels like I am the only one there which is an son! I won loads of vocal awards as a teen and that was one of many. I won awards for classi- indescribable feeling. cal singing, pop, jazz, Broadway, etc. I do LOVE jazz, but it was never a genre I considered pursuing professionally.

How would you describe your debut single “He Said She Said”? It is a song that encompasses pop and R&B and brings them together for a fun, feel-good song. I’ve always had a thing for ‘feel-good’ songs and I think this ﬁts that category. Plus, it has a great message--an actual point.

“It is not ‘accepted’ to sing all sorts of genres on one album.” Whose sound has inﬂuenced your sound? Though I do not think I sound a lot like one speciﬁc singer (which is a good thing, of course) I have been most inﬂuenced by Mariah Carey, Ella Fitzgerald, Dinah Washington and Lauryn Hill. My earliest inﬂuence was Bette Midler with the “Beaches” soundtrack. 26

Your career to date has been ﬁlled with amazing performances, from the Pan-Am Games through to India’s biggest televised Christmas concert. What would you say the highlight would be? Impossible question! I have so many incredible memories of singing in various countries and anywhere from small community events to stages in front of thousands! If you could perform anywhere in the world, with anyone, where would that be? The O2 Arena with fellow Canadian Michael Bublé. What are your hopes for 2010? Well....seeing that my ﬁrst album will be releasing in October, and my ﬁrst single on August 30th, I hope to sell lots of music in 2010! “He Said She Said” is out now. www.taramathew.com The Kaje is all about the arts - from the upcoming and underground through to the commercial mainstream. Issue 5 takes a look at: Stornoway,...

The Kaje is all about the arts - from the upcoming and underground through to the commercial mainstream. Issue 5 takes a look at: Stornoway,...