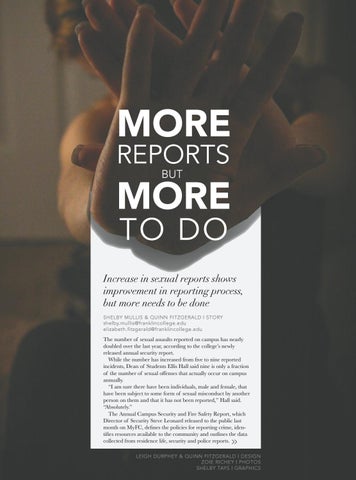 The number of sexual assaults reported on campus has nearly doubled over the last year, according to the college’s newly released annual security report. While the number has increased from five to nine reported incidents, Dean of Students Ellis Hall said nine is only a fraction of the number of sexual offenses that actually occur on campus annually. “I am sure there have been individuals, male and female, that have been subject to some form of sexual misconduct by another person on them and that it has not been reported,” Hall said. “Absolutely.” The Annual Campus Security and Fire Safety Report, which Director of Security Steve Leonard released to the public last month on MyFC, defines the policies for reporting crime, identifies resources available to the community and outlines the data collected from residence life, security and police reports. LEIGH DURPHEY & QUINN FITZGERALD | DESIGN ZOIE RICHEY | PHOTOS SHELBY TAYS | GRAPHICS