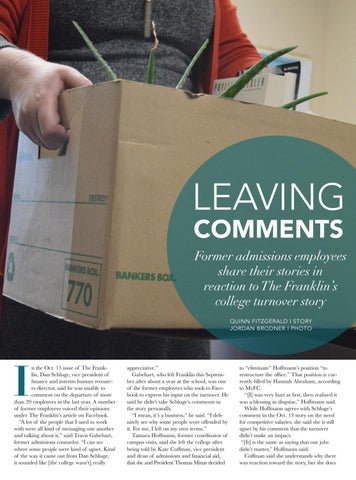 n the Oct. 13 issue of The Franklin, Dan Schluge, vice president of finance and interim human resources director, said he was unable to comment on the departure of more than 20 employees in the last year. A number of former employees voiced their opinions under The Franklin’s article on Facebook. “A lot of the people that I used to work with were all kind of messaging one another and talking about it,” said Travis Gabehart, former admissions counselor. “I can see where some people were kind of upset. Kind of the way it came out from Dan Schluge, it sounded like [the college wasn’t] really

appreciative.” Gabehart, who left Franklin this September after about a year at the school, was one of the former employees who took to Facebook to express his input on the turnover. He said he didn’t take Schluge’s comments in the story personally. “I mean, it’s a business,” he said. “I definitely see why some people were offended by it. For me, I left on my own terms.” Tamara Hoffmann, former coordinator of campus visits, said she left the college after being told by Kate Coffman, vice president and dean of admissions and financial aid, that she and President Thomas Minar decided

to “eliminate” Hoffmann’s position “to restructure the office.” That position is currently filled by Hannah Abraham, according to MyFC. “[I] was very hurt at first, then realized it was a blessing in disguise,” Hoffmann said. While Hoffmann agrees with Schluge’s comment in the Oct. 13 story on the need for competitive salaries, she said she is still upset by his comment that the turnover didn’t make an impact. “[It] is the same as saying that our jobs didn’t matter,” Hoffmann said. Coffman said she understands why there was reaction toward the story, but she does