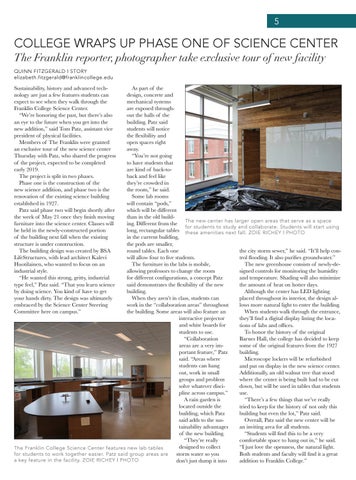 As part of the design, concrete and mechanical systems are exposed throughout the halls of the building. Patz said students will notice the flexibility and open spaces right away. “You’re not going to have students that are kind of back-toback and feel like they’re crowded in the room,” he said. Some lab rooms will contain “pods,” which will be different than in the old buildThe new center has larger open areas that serve as a space ing. Different from the for students to study and collaborate. Students will start using long, rectangular tables these amenities next fall. ZOIE RICHEY | PHOTO in the current building, the pods are smaller, round tables. Each one the city storm sewer,” he said. “It’ll help conwill allow four to five students. trol flooding. It also purifies groundwater.” The furniture in the labs is mobile, The new greenhouse consists of newly-deallowing professors to change the room signed controls for monitoring the humidity for different configurations, a concept Patz and temperature. Shading will also minimize said demonstrates the flexibility of the new the amount of heat on hotter days. building. Although the center has LED lighting When they aren’t in class, students can placed throughout its interior, the design alwork in the “collaboration areas” throughout lows more natural light to enter the building. the building. Some areas will also feature an When students walk through the entrance, interactive projector they’ll find a digital display listing the locaand white boards for tions of labs and offices. students to use. To honor the history of the original “Collaboration Barnes Hall, the college has decided to keep areas are a very imsome of the original features from the 1927 portant feature,” Patz building. said. “Areas where Microscope lockers will be refurbished students can hang and put on display in the new science center. out, work in small Additionally, an old walnut tree that stood groups and problem where the center is being built had to be cut solve whatever discidown, but will be used in tables that students pline across campus.” use. A rain garden is “There’s a few things that we’ve really located outside the tried to keep for the history of not only this building, which Patz building but even the lot,” Patz said. said adds to the susOverall, Patz said the new center will be tainability advantages an inviting area for all students. of the new building. “Students will find this to be a very “They’re really comfortable space to hang out in,” he said. designed to collect “I just love the openness, the natural light. The Franklin College Science Center features new lab tables storm water so you Both students and faculty will find it a great for students to work together easier. Patz said group areas are a key feature in the facility. ZOIE RICHEY | PHOTO don’t just dump it into addition to Franklin College.” Sustainability, history and advanced technology are just a few features students can expect to see when they walk through the Franklin College Science Center. “We’re honoring the past, but there’s also an eye to the future when you get into the new addition,” said Tom Patz, assistant vice president of physical facilities. Members of The Franklin were granted an exclusive tour of the new science center Thursday with Patz, who shared the progress of the project, expected to be completed early 2019. The project is split in two phases. Phase one is the construction of the new science addition, and phase two is the renovation of the existing science building established in 1927. Patz said phase two will begin shortly after the week of May 21 once they finish moving furniture into the science center. Classes will be held in the newly-constructed portion of the building next fall when the existing structure is under construction. The building design was created by BSA LifeStructures, with lead architect Kalevi Huotilainen, who wanted to focus on an industrial style. “He wanted this strong, gritty, industrial type feel,” Patz said. “That you learn science by doing science. You kind of have to get your hands dirty. The design was ultimately embraced by the Science Center Steering Committee here on campus.”