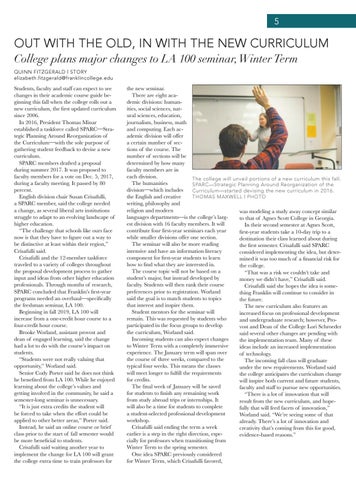 OUT WITH THE OLD, IN WITH THE NEW CURRICULUM College plans major changes to LA 100 seminar, Winter Term QUINN FITZGERALD | STORY elizabeth.fitzgerald@franklincollege.edu

Students, faculty and staff can expect to see changes in their academic course guide beginning this fall when the college rolls out a new curriculum, the first updated curriculum since 2006. In 2016, President Thomas Minar established a taskforce called SPARC—Strategic Planning Around Reorganization of the Curriculum—with the sole purpose of gathering student feedback to devise a new curriculum. SPARC members drafted a proposal during summer 2017. It was proposed to faculty members for a vote on Dec. 5, 2017, during a faculty meeting. It passed by 80 percent. English division chair Susan Crisafulli, a SPARC member, said the college needed a change, as several liberal arts institutions struggle to adapt to an evolving landscape of higher education. “The challenge that schools like ours face now is that they have to figure out a way to be distinctive at least within their region,” Crisafulli said. Crisafulli and the 12-member taskforce traveled to a variety of colleges throughout the proposal development process to gather input and ideas from other higher education professionals. Through months of research, SPARC concluded that Franklin’s first-year programs needed an overhaul—specifically the freshman seminar, LA 100. Beginning in fall 2019, LA 100 will increase from a one-credit hour course to a four-credit hour course. Brooke Worland, assistant provost and dean of engaged learning, said the change had a lot to do with the course’s impact on students. “Students were not really valuing that opportunity,” Worland said. Senior Cody Porter said he does not think he benefited from LA 100. While he enjoyed learning about the college’s values and getting involved in the community, he said a semester-long seminar is unnecessary. “It is just extra credits the student will be forced to take when the effort could be applied to other better areas,” Porter said. Instead, he said an online course or brief class prior to the start of fall semester would be more beneficial to students. Crisafulli said waiting another year to implement the change for LA 100 will grant the college extra time to train professors for

the new seminar. There are eight academic divisions: humanities, social sciences, natural sciences, education, journalism, business, math and computing. Each academic division will offer a certain number of sections of the course. The number of sections will be determined by how many faculty members are in each division. The college will unveil portions of a new curriculum this fall. The humanities SPARC—Strategic Planning Around Reorganization of the division—which includes Curriculum—started devising the new curriculum in 2016. THOMAS MAXWELL | PHOTO the English and creative writing, philosophy and religion and modern was modeling a study away concept similar languages departments—is the college’s largto that of Agnes Scott College in Georgia. est division with 16 faculty members. It will In their second semester at Agnes Scott, contribute four first-year seminars each year first-year students take a 10-day trip to a while smaller divisions offer one section. destination their class learned about during The seminar will also be more reading the first semester. Crisafulli said SPARC intensive and have an information literacy considered implementing the idea, but detercomponent for first-year students to learn mined it was too much of a financial risk for how to find what they are interested in. the college. The course topic will not be based on a “That was a risk we couldn’t take and student’s major, but instead developed by money we didn’t have,” Crisafulli said. faculty. Students will then rank their course Crisafulli said she hopes the idea is somepreferences prior to registration. Worland thing Franklin will continue to consider in said the goal is to match students to topics the future. that interest and inspire them. The new curriculum also features an Student mentors for the seminar will increased focus on professional development remain. This was requested by students who and undergraduate research; however, Proparticipated in the focus groups to develop vost and Dean of the College Lori Schroeder the curriculum, Worland said. said several other changes are pending with Incoming students can also expect changes the implementation team. Many of these to Winter Term with a completely immersive ideas include an increased implementation experience. The January term will span over of technology. the course of three weeks, compared to the The incoming fall class will graduate typical four weeks. This means the classes under the new requirements. Worland said will meet longer to fulfill the requirements the college anticipates the curriculum change for credits. will inspire both current and future students, The final week of January will be saved faculty and staff to pursue new opportunities. for students to finish any remaining work “There is a lot of innovation that will from study abroad trips or internships. It result from the new curriculum, and hopewill also be a time for students to complete fully that will feed facets of innovation,” a student-selected professional development Worland said. “We’re seeing some of that workshop. already. There’s a lot of innovation and Crisafulli said ending the term a week creativity that’s coming from this for good, earlier is a step in the right direction, espeevidence-based reasons.” cially for professors when transitioning from Winter Term to the spring semester. One idea SPARC previously considered for Winter Term, which Crisafulli favored,