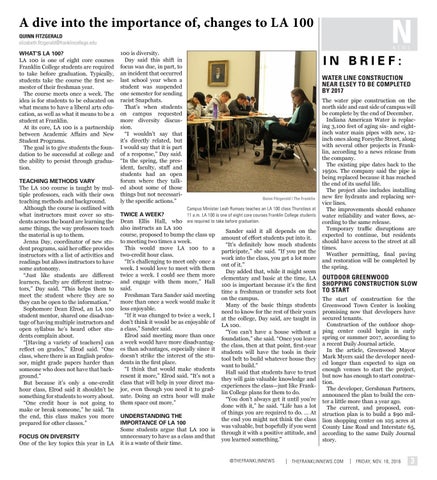 A dive into the importance of, changes to LA 100 QUINN FITZGERALD elizabeth.fitzgerald@franklincollege.edu

WHAT’S LA 100? LA 100 is one of eight core courses Franklin College students are required to take before graduation. Typically, students take the course the first semester of their freshman year. The course meets once a week. The idea is for students to be educated on what means to have a liberal arts education, as well as what it means to be a student at Franklin. At its core, LA 100 is a partnership between Academic Affairs and New Student Programs. The goal is to give students the foundation to be successful at college and the ability to persist through graduation. TEACHING METHODS VARY The LA 100 course is taught by multiple professors, each with their own teaching methods and background. Although the course is outlined with what instructors must cover so students across the board are learning the same things, the way professors teach the material is up to them. Jenna Day, coordinator of new student programs, said her office provides instructors with a list of activities and readings but allows instructors to have some autonomy. “Just like students are different learners, faculty are different instructors,” Day said. “This helps them to meet the student where they are so they can be open to the information.” Sophomore Dean Elrod, an LA 100 student mentor, shared one disadvantage of having multiple instructors and open syllabus he’s heard other students complain about. “[Having a variety of teachers] can reflect on grades,” Elrod said. “One class, where there is an English professor, might grade papers harder than someone who does not have that background.” But because it’s only a one-credit hour class, Elrod said it shouldn’t be something for students to worry about. “One credit hour is not going to make or break someone,” he said. “In the end, this class makes you more prepared for other classes.” FOCUS ON DIVERSITY One of the key topics this year in LA

100 is diversity. Day said this shift in focus was due, in part, to an incident that occurred last school year when a student was suspended one semester for sending racist Snapchats. That’s when students on campus requested more diversity discussion. “I wouldn’t say that it’s directly related, but I would say that it is part of a response,” Day said. “In the spring, the president, faculty, staff and students had an open forum where they talked about some of those things but not necessarily the specific actions.”

IN BRIEF: WATER LINE CONSTRUCTION NEAR ELSEY TO BE COMPLETED BY 2017

TWICE A WEEK? 11 a.m. LA 100 is one of eight core courses Franklin College students Dean Ellis Hall, who are required to take before graduation. also instructs an LA 100 Sander said it all depends on the course, proposed to bump the class up amount of effort students put into it. to meeting two times a week. “It’s definitely how much students This would move LA 100 to a participate,” she said. “If you put the two-credit hour class. work into the class, you get a lot more “It’s challenging to meet only once a out of it.” week. I would love to meet with them Day added that, while it might seem twice a week. I could see them more elementary and basic at the time, LA and engage with them more,” Hall 100 is important because it’s the first said. time a freshman or transfer sets foot Freshman Tara Sander said meeting on the campus. more than once a week would make it Many of the basic things students less enjoyable. need to know for the rest of their years “If it was changed to twice a week, I at the college, Day said, are taught in don’t think it would be as enjoyable of LA 100. a class,” Sander said. “You can’t have a house without a Elrod said meeting more than once foundation,” she said. “Once you leave a week would have more disadvantagthe class, then at that point, first-year es than advantages, especially since it students will have the tools in their doesn’t strike the interest of the stutool belt to build whatever house they dents in the first place. want to build.” “I think that would make students Hall said that students have to trust resent it more,” Elrod said. “It’s not a they will gain valuable knowledge and class that will help in your direct maexperiences the class—just like Frankjor, even though you need it to gradlin College plans for them to do. uate. Doing an extra hour will make “You don’t always get it until you’re them space out more.” done with it,” he said. “Life has a lot of things you are required to do. … At UNDERSTANDING THE the end you might not think the class IMPORTANCE OF LA 100 was valuable, but hopefully if you went Some students argue that LA 100 is through it with a positive attitude, and unnecessary to have as a class and that you learned something.” it is a waste of their time. @THEFRANKLINNEWS

The water pipe construction on the north side and east side of campus will be complete by the end of December. Indiana American Water is replacing 3,100 feet of aging six- and eightinch water main pipes with new, 12inch ones along Forsythe Street, along with several other projects in Franklin, according to a news release from the company. The existing pipe dates back to the 1950s. The company said the pipe is being replaced because it has reached the end of its useful life. The project also includes installing new fire hydrants and replacing service lines. The improvements should enhance water reliability and water flows, according to the same release. Temporary traffic disruptions are expected to continue, but residents should have access to the street at all times. Weather permitting, final paving and restoration will be completed by the spring.

OUTDOOR GREENWOOD SHOPPING CONSTRUCTION SLOW TO START The start of construction for the Greenwood Town Center is looking promising now that developers have secured tenants. Construction of the outdoor shopping center could begin in early spring or summer 2017, according to a recent Daily Journal article. In the article, Greenwood Mayor Mark Myers said the developer needed longer than expected to sign on enough venues to start the project, but now has enough to start construction. The developer, Gershman Partners, announced the plan to build the center a little more than a year ago. The current, and proposed, construction plan is to build a $90 million shopping center on 105 acres at County Line Road and Interstate 65, according to the same Daily Journal story.