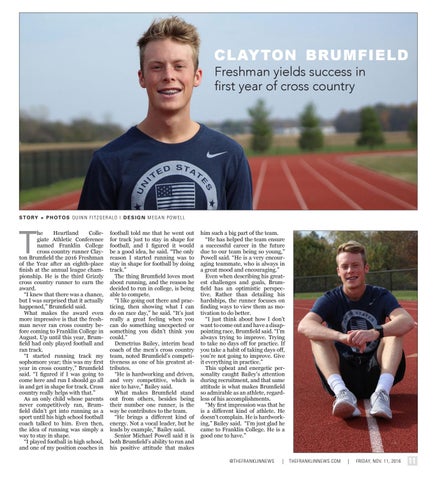 he Heartland Collegiate Athletic Conference named Franklin College cross country runner Clayton Brumfield the 2016 Freshman of the Year after an eighth-place finish at the annual league championship. He is the third Grizzly cross country runner to earn the award. “I knew that there was a chance, but I was surprised that it actually happened,” Brumfield said. What makes the award even more impressive is that the freshman never ran cross country before coming to Franklin College in August. Up until this year, Brumfield had only played football and ran track. “I started running track my sophomore year; this was my first year in cross country,” Brumfield said. “I figured if I was going to come here and run I should go all in and get in shape for track. Cross country really helps with that.” As an only child whose parents never competitively ran, Brumfield didn’t get into running as a sport until his high school football coach talked to him. Even then, the idea of running was simply a way to stay in shape. “I played football in high school, and one of my position coaches in

football told me that he went out for track just to stay in shape for football, and I figured it would be a good idea, he said. “The only reason I started running was to stay in shape for football by doing track.” The thing Brumfield loves most about running, and the reason he decided to run in college, is being able to compete. “I like going out there and practicing, then showing what I can do on race day,” he said. “It’s just really a great feeling when you can do something unexpected or something you didn’t think you could.” Demetrius Bailey, interim head coach of the men’s cross country team, noted Brumfield’s competitiveness as one of his greatest attributes. “He is hardworking and driven, and very competitive, which is nice to have,” Bailey said. What makes Brumfield stand out from others, besides being their number one runner, is the way he contributes to the team. “He brings a different kind of energy. Not a vocal leader, but he leads by example,” Bailey said. Senior Michael Powell said it is both Brumfield’s ability to run and his positive attitude that makes

him such a big part of the team. “He has helped the team ensure a successful career in the future due to our team being so young,” Powell said. “He is a very encouraging teammate, who is always in a great mood and encouraging.” Even when describing his greatest challenges and goals, Brumfield has an optimistic perspective. Rather than detailing his hardships, the runner focuses on finding ways to view them as motivation to do better. “I just think about how I don’t want to come out and have a disappointing race, Brumfield said. “I’m always trying to improve. Trying to take no days off for practice. If you take a habit of taking days off, you’re not going to improve. Give it everything in practice.” This upbeat and energetic personality caught Bailey’s attention during recruitment, and that same attitude is what makes Brumfield so admirable as an athlete, regardless of his accomplishments. “My first impression was that he is a different kind of athlete. He doesn’t complain. He is hardworking,” Bailey said. “I’m just glad he came to Franklin College. He is a good one to have.”