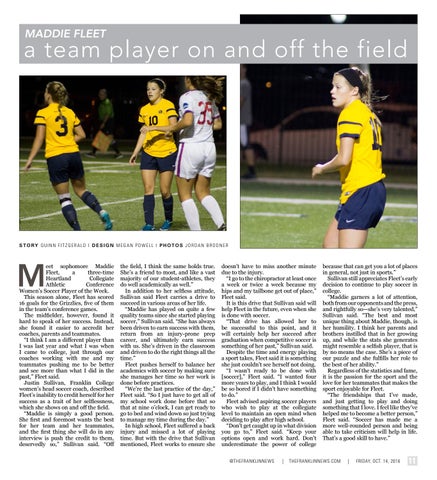 a team player on and off the field

eet sophomore Maddie Fleet, a three-time Heartland Collegiate Athletic Conference Women’s Soccer Player of the Week. This season alone, Fleet has scored 16 goals for the Grizzlies, five of them in the team’s conference games. The midfielder, however, found it hard to speak of her success. Instead, she found it easier to accredit her coaches, parents and teammates. “I think I am a different player than I was last year and what I was when I came to college, just through our coaches working with me and my teammates pushing me to be better and see more than what I did in the past,” Fleet said. Justin Sullivan, Franklin College women’s head soccer coach, described Fleet’s inability to credit herself for her success as a trait of her selflessness, which she shows on and off the field. “Maddie is simply a good person. She first and foremost wants the best for her team and her teammates, and the first thing she will do in any interview is push the credit to them, deservedly so,” Sullivan said. “Off

the field, I think the same holds true. She’s a friend to most, and like a vast majority of our student-athletes, they do well academically as well.” In addition to her selfless attitude, Sullivan said Fleet carries a drive to succeed in various areas of her life. “Maddie has played on quite a few quality teams since she started playing soccer,” Sullivan said. “She has always been driven to earn success with them, return from an injury-prone prep career, and ultimately earn success with us. She’s driven in the classroom and driven to do the right things all the time.” Fleet pushes herself to balance her academics with soccer by making sure she manages her time so her work is done before practices. “We’re the last practice of the day,” Fleet said. “So I just have to get all of my school work done before that so that at nine o’clock, I can get ready to go to bed and wind down so just trying to manage my time during the day.” In high school, Fleet suffered a back injury and missed a lot of playing time. But with the drive that Sullivan mentioned, Fleet works to ensure she

doesn’t have to miss another minute due to the injury. “I go to the chiropractor at least once a week or twice a week because my hips and my tailbone get out of place,” Fleet said. It is this drive that Sullivan said will help Fleet in the future, even when she is done with soccer. “That drive has allowed her to be successful to this point, and it will certainly help her succeed after graduation when competitive soccer is something of her past,” Sullivan said. Despite the time and energy playing a sport takes, Fleet said it is something she just couldn’t see herself not doing. “I wasn’t ready to be done with [soccer],” Fleet said. “I wanted four more years to play, and I think I would be so bored if I didn’t have something to do.” Fleet advised aspiring soccer players who wish to play at the collegiate level to maintain an open mind when deciding to play after high school. “Don’t get caught up in what division you go to,” Fleet said. “Keep your options open and work hard. Don’t underestimate the power of college @THEFRANKLINNEWS

because that can get you a lot of places in general, not just in sports.” Sullivan still appreciates Fleet’s early decision to continue to play soccer in college. “Maddie garners a lot of attention, both from our opponents and the press, and rightfully so—she’s very talented,” Sullivan said. “The best and most unique thing about Maddie, though, is her humility. I think her parents and brothers instilled that in her growing up, and while the stats she generates might resemble a selfish player, that is by no means the case. She’s a piece of our puzzle and she fulfills her role to the best of her ability.” Regardless of the statistics and fame, it is the passion for the sport and the love for her teammates that makes the sport enjoyable for Fleet. “The friendships that I’ve made, and just getting to play and doing something that I love. I feel like they’ve helped me to become a better person,” Fleet said. “Soccer has made me a more well-rounded person and being able to take criticism will help in life. That’s a good skill to have.”