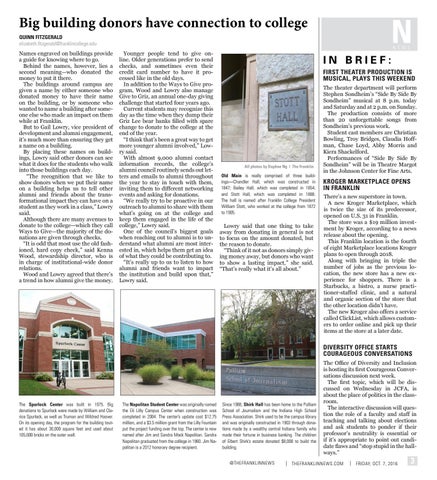 Names engraved on buildings provide a guide for knowing where to go. Behind the names, however, lies a second meaning—who donated the money to put it there. The buildings around campus are given a name by either someone who donated money to have their name on the building, or by someone who wanted to name a building after someone else who made an impact on them while at Franklin. But to Gail Lowry, vice president of development and alumni engagement, it’s much more than ensuring they get a name on a building. By placing these names on buildings, Lowry said other donors can see what it does for the students who walk into those buildings each day. “The recognition that we like to show donors when we put their name on a building helps us to tell other alumni and friends about the transformational impact they can have on a student as they work in a class,” Lowry said. Although there are many avenues to donate to the college—which they call Ways to Give—the majority of the donations are given through checks. “It is odd that most use the old fashioned, hard copy check,” said Kenna Wood, stewardship director, who is in charge of institutional-wide donor relations. Wood and Lowry agreed that there’s a trend in how alumni give the money.

Younger people tend to give online. Older generations prefer to send checks, and sometimes even their credit card number to have it processed like in the old days. In addition to the Ways to Give program, Wood and Lowry also manage Give to Griz, an annual one-day giving challenge that started four years ago. Current students may recognize this day as the time when they dump their Griz Lee bear banks filled with spare change to donate to the college at the end of the year. “I think that’s been a great way to get more younger alumni involved,” Lowry said. With almost 9,000 alumni contact information records, the college’s alumni council routinely sends out letters and emails to alumni throughout the year to stay in touch with them, inviting them to different networking events and asking for donations. “We really try to be proactive in our outreach to alumni to share with them what’s going on at the college and keep them engaged in the life of the college,” Lowry said. One of the council’s biggest goals when reaching out to alumni is to understand what alumni are most interested in, which helps them get an idea of what they could be contributing to. “It’s really up to us to listen to how alumni and friends want to impact the institution and build upon that,” Lowry said.

IN BRIEF: FIRST THEATER PRODUCTION IS MUSICAL, PLAYS THIS WEEKEND

All photos by Daphne Ng | The Franklin

Lowry said that one thing to take away from donating in general is not to focus on the amount donated, but the reason to donate. “Think of it not as donors simply giving money away, but donors who want to show a lasting impact,” she said. “That’s really what it’s all about.”

The theater department will perform Stephen Sondheim’s “Side By Side By Sondheim” musical at 8 p.m. today and Saturday and at 2 p.m. on Sunday. The production consists of more than 20 unforgettable songs from Sondheim’s previous work. Student cast members are Christian Bowling, Troy Bridges, Claudia Hoffman, Chase Loyd, Abby Morris and Kiera Shackelford. Performances of “Side By Side By Sondheim” will be in Theatre Margot in the Johnson Center for Fine Arts.

KROGER MARKETPLACE OPENS IN FRANKLIN There’s a new superstore in town. A new Kroger Marketplace, which is twice the size of its predecessor, opened on U.S. 31 in Franklin. The store was a $19 million investment by Kroger, according to a news release about the opening. This Franklin location is the fourth of eight Marketplace locations Kroger plans to open through 2018. Along with bringing in triple the number of jobs as the previous location, the new store has a new experience for shoppers. There is a Starbucks, a bistro, a nurse practitioner-staffed clinic, and a natural and organic section of the store that the other location didn’t have. The new Kroger also offers a service called ClickList, which allows customers to order online and pick up their items at the store at a later date.

The Spurlock Center was built in 1975. Big donations to Spurlock were made by William and Clarice Spurlock, as well as Truman and Wildred Hoover. On its opening day, the program for the building touted it has about 30,000 square feet and used about 105,000 bricks on the outer wall.

The Napolitan Student Center was originally named the Eli Lilly Campus Center when construction was completed in 2004. The center’s update cost $12.75 million, and a $3.5 million grant from the Lilly Fountain put the project funding over the top. The center is now named after Jim and Sandra Mock Napolitan. Sandra Napolitan graduated from the college in 1960. Jim Napolitan is a 2012 honorary degree recipient.

Since 1988, Shirk Hall has been home to the Pulliam School of Journalism and the Indiana High School Press Association. Shirk used to be the campus library and was originally constructed in 1903 through donations made by a wealthy central Indiana family who made their fortune in business banking. The children of Elbert Shirk’s estate donated $8,000 to build the building. @THEFRANKLINNEWS

The Office of Diversity and Inclusion is hosting its first Courageous Conversations discussion next week. The first topic, which will be discussed on Wednesday in JCFA, is about the place of politics in the classroom. The interactive discussion will question the role of a faculty and staff in teaching and talking about elections and ask students to ponder if their professor’s neutrality is essential or if it’s appropriate to point out candidate flaws and “stop stupid in the hallways.”