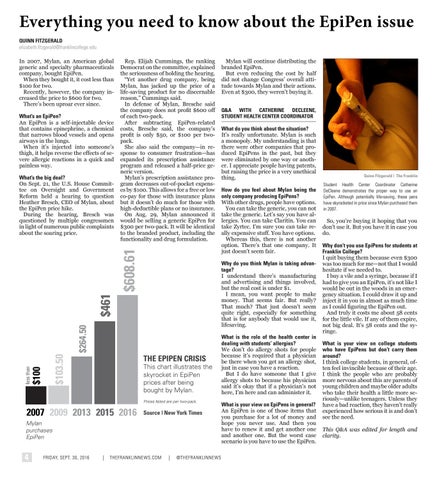 Everything you need to know about the EpiPen issue QUINN FITZGERALD elizabeth.fitzgerald@franklincollege.edu

In 2007, Mylan, an American global generic and specialty pharmaceuticals company, bought EpiPen. When they bought it, it cost less than $100 for two. Recently, however, the company increased the price to $600 for two. There’s been uproar ever since. What’s an EpiPen? An EpiPen is a self-injectable device that contains epinephrine, a chemical that narrows blood vessels and opens airways in the lungs. When it’s injected into someone’s thigh, it helps reverse the effects of severe allergic reactions in a quick and painless way.

What’s the big deal? On Sept. 21, the U.S. House Committee on Oversight and Government Reform held a hearing to question Heather Bresch, CEO of Mylan, about the EpiPen price hike. During the hearing, Bresch was questioned by multiple congressmen in light of numerous public complaints about the soaring price.

Rep. Elijah Cummings, the ranking Democrat on the committee, explained the seriousness of holding the hearing. “Yet another drug company, being Mylan, has jacked up the price of a life-saving product for no discernable reason,” Cummings said. In defense of Mylan, Bresche said the company does not profit $600 off of each two-pack. After subtracting EpiPen-related costs, Bresche said, the company’s profit is only $50, or $100 per twopack. She also said the company—in response to consumer frustration—has expanded its prescription assistance program and released a half-price generic version. Mylan’s prescription assistance program decreases out-of-pocket expenses by $100. This allows for a free or low co-pay for those with insurance plans but it doesn’t do much for those with high-deductible plans or no insurance. On Aug. 29, Mylan announced it would be selling a generic EpiPen for $300 per two-pack. It will be identical to the branded product, including the functionality and drug formulation.

This chart illustrates the skyrocket in EpiPen prices after being bought by Mylan. Prices listed are per two-pack.

What do you think about the situation? It’s really unfortunate. Mylan is such a monopoly. My understanding is that there were other companies that produced EpiPens in the past, but they were eliminated by one way or another. I appreciate people having patents, but raising the price is a very unethical thing. How do you feel about Mylan being the only company producing EpiPens? With other drugs, people have options. You can take the generic, you can not take the generic. Let’s say you have allergies. You can take Claritin. You can take Zyrtec. I’m sure you can take really expensive stuff. You have options. Whereas this, there is not another option. There’s that one company. It just doesn’t seem fair. Why do you think Mylan is taking advantage? I understand there’s manufacturing and advertising and things involved, but the real cost is under $1. I mean, you want people to make money. That seems fair. But really? That much? That just doesn’t seem quite right, especially for something that is for anybody that would use it, lifesaving.

Mylan will continue distributing the branded EpiPen. But even reducing the cost by half did not change Congress’ overall attitude towards Mylan and their actions. Even at $300, they weren’t buying it.

What is the role of the health center in dealing with students’ allergies? We don’t do allergy shots for people because it’s required that a physician be there when you get an allergy shot, just in case you have a reaction. But I do have someone that I give allergy shots to because his physician said it’s okay that if a physician’s not here, I’m here and can administer it. What is your view on EpiPens in general? An EpiPen is one of those items that you purchase for a lot of money and hope you never use. And then you have to renew it and get another one and another one. But the worst case scenario is you have to use the EpiPen.

Student Health Center Coordinator Catherine DeCleene demonstrates the proper way to use an EpiPen. Although potentially life-saving, these pens have skyrocketed in price since Mylan purchased them in 2007.

So, you’re buying it hoping that you don’t use it. But you have it in case you do. Why don’t you use EpiPens for students at Franklin College? I quit buying them because even $300 was too much for me—not that I would hesitate if we needed to. I buy a vile and a syringe, because if I had to give you an EpiPen, it’s not like I would be out in the woods in an emergency situation. I could draw it up and inject it in you in almost as much time as I could figuring the EpiPen out. And truly it costs me about 58 cents for the little vile. If any of them expire, not big deal. It’s 58 cents and the syringe. What is your view on college students who have EpiPens but don’t carry them around? I think college students, in general, often feel invincible because of their age. I think the people who are probably more nervous about this are parents of young children and maybe older adults who take their health a little more seriously—unlike teenagers. Unless they have a bad reaction, they haven’t really experienced how serious it is and don’t see the need. This Q&A was edited for length and clarity.