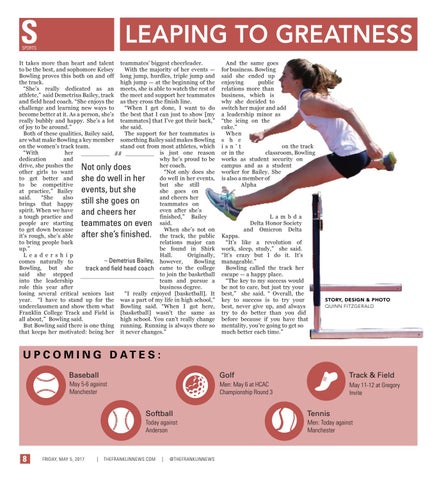 It takes more than heart and talent teammates’ biggest cheerleader. to be the best, and sophomore Kelsey With the majority of her events — Bowling proves this both on and off long jump, hurdles, triple jump and the track. high jump — at the beginning of the “She’s really dedicated as an meets, she is able to watch the rest of athlete,” said Demetrius Bailey, track the meet and support her teammates and field head coach. “She enjoys the as they cross the finish line. challenge and learning new ways to “When I get done, I want to do become better at it. As a person, she’s the best that I can just to show [my really bubbly and happy. She’s a lot teammates] that I’ve got their back,” of joy to be around.” she said. Both of these qualities, Bailey said, The support for her teammates is are what make Bowling a key member something Bailey said makes Bowling on the women’s track team. stand out from most athletes, which “With her is just one reason dedication and why he’s proud to be drive, she pushes the her coach. other girls to want “Not only does she to get better and do well in her events, to be competitive but she still at practice,” Bailey she goes on said. “She also and cheers her brings that happy teammates on spirit. When we have even after she’s a tough practice and finished,” Bailey people are starting said. to get down because When she’s not on it’s rough, she’s able the track, the public to bring people back relations major can up.” be found in Shirk L e a d e r s h i p Hall. Originally, – Demetrius Bailey, however, comes naturally to Bowling Bowling, but she track and field head coach came to the college said she stepped to join the basketball into the leadership team and pursue a role this year after business degree. losing several critical seniors last “I really enjoyed [basketball]. It year. “I have to stand up for the was a part of my life in high school,” underclassmen and show them what Bowling said. “When I got here, Franklin College Track and Field is [basketball] wasn’t the same as all about,” Bowling said. high school. You can’t really change But Bowling said there is one thing running. Running is always there so that keeps her motivated: being her it never changes.”

Not only does she do well in her events, but she still she goes on and cheers her teammates on even after she’s finished.

And the same goes for business. Bowling said she ended up enjoying public relations more than business, which is why she decided to switch her major and add a leadership minor as “the icing on the cake.” When s h e isn’t on the track or in the classroom, Bowling works as student security on campus and as a student worker for Bailey. She is also a member of Alpha

Kappa. “It’s like a revolution of work, sleep, study,” she said. “It’s crazy but I do it. It’s manageable.” Bowling called the track her escape — a happy place. “The key to my success would be not to care, but just try your best,” she said. “ Overall, the key to success is to try your best, never give up, and always try to do better than you did before because if you have that mentality, you’re going to get so much better each time.”

Men: May 6 at HCAC Championship Round 3