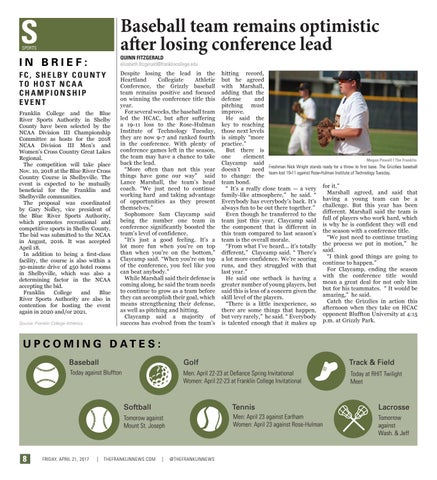 IN BRIEF: FC, SHELBY COUNTY TO HOST NCAA CHAMPIONSHIP EVENT Franklin College and the Blue River Sports Authority in Shelby County have been selected by the NCAA Division III Championship Committee as hosts for the 2018 NCAA Division III Men’s and Women’s Cross Country Great Lakes Regional. The competition will take place Nov. 10, 2018 at the Blue River Cross Country Course in Shelbyville. The event is expected to be mutually beneficial for the Franklin and Shelbyville communities. The proposal was coordinated by Gary Nolley, vice president of the Blue River Sports Authority, which promotes recreational and competitive sports in Shelby County. The bid was submitted to the NCAA in August, 2016. It was accepted April 18. In addition to being a first-class facility, the course is also within a 30-minute drive of 450 hotel rooms in Shelbyville, which was also a determining factor in the NCAA accepting the bid. Franklin College and Blue River Sports Authority are also in contention for hosting the event again in 2020 and/or 2021. Source: Franklin College Athletics

Despite losing the lead in the Heartland Collegiate Athletic Conference, the Grizzly baseball team remains positive and focused on winning the conference title this year. For several weeks, the baseball team led the HCAC, but after suffering a 19-11 loss to the Rose-Hulman Institute of Technology Tuesday, they are now 9-7 and ranked fourth in the conference. With plenty of conference games left in the season, the team may have a chance to take back the lead. “More often than not this year things have gone our way” said Lance Marshall, the team’s head coach. “We just need to continue working hard and taking advantage of opportunities as they present themselves.” Sophomore Sam Claycamp said being the number one team in conference significantly boosted the team’s level of confidence. “It’s just a good feeling. It’s a lot more fun when you’re on top than when you’re on the bottom,” Claycamp said. “When you’re on top of the conference, you feel like you can beat anybody.” While Marshall said their defense is coming along, he said the team needs to continue to grow as a team before they can accomplish their goal, which means strengthening their defense, as well as pitching and hitting. Claycamp said a majority of success has evolved from the team’s

hitting record, but he agreed with Marshall, adding that the defense and pitching must improve. He said the key to reaching those next levels is simply “more practice.” But there is one element Megan Powell I The Franklin Claycamp said Freshman Nick Wright stands ready for a throw to first base. The Grizzlies baseball doesn’t need team lost 19-11 against Rose-Hulman Institute of Technology Tuesday. to change: the team bond. “ It’s a really close team — a very for it.” Marshall agreed, and said that family-like atmosphere,” he said. “ having a young team can be a Everybody has everybody’s back. It’s challenge. But this year has been always fun to be out there together.” different. Marshall said the team is Even though he transferred to the full of players who work hard, which team just this year, Claycamp said is why he is confident they will end the component that is different in the season with a conference title. this team compared to last season’s “We just need to continue trusting team is the overall morale. “From what I’ve heard... it’s totally the process we put in motion,” he different,” Claycamp said. “ There’s said. “I think good things are going to a lot more confidence. We’re scoring continue to happen.” runs, and they struggled with that For Claycamp, ending the season last year.” with the conference title would He said one setback is having a mean a great deal for not only him greater number of young players, but but for his teammates. “ It would be said this is less of a concern given the amazing,” he said. skill level of the players. Catch the Grizzlies in action this “There is a little inexperience, so afternoon when they take on HCAC there are some things that happen, opponent Bluffton University at 4:15 but very rarely,” he said. “ Everybody p.m. at Grizzly Park. is talented enough that it makes up