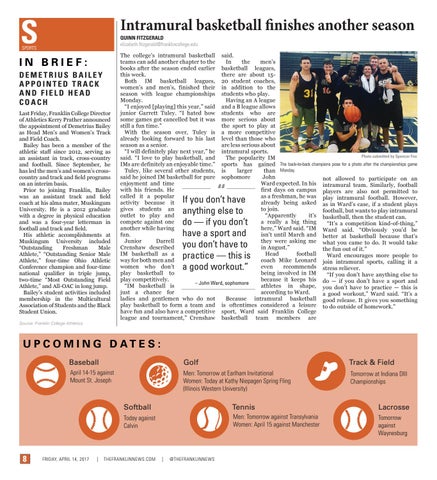 IN BRIEF: DEMETRIUS BAILEY APPOINTED TRACK AND FIELD HEAD COACH Last Friday, Franklin College Director of Athletics Kerry Prather announced the appointment of Demetrius Bailey as Head Men’s and Women’s Track and Field Coach. Bailey has been a member of the athletic staff since 2012, serving as an assistant in track, cross-country and football. Since September, he has led the men’s and women’s crosscountry and track and field programs on an interim basis. Prior to joining Franklin, Bailey was an assistant track and field coach at his alma mater, Muskingum University. He is a 2012 graduate with a degree in physical education and was a four-year letterman in football and track and field. His athletic accomplishments at Muskingum University included “Outstanding Freshman Male Athlete,” “Outstanding Senior Male Athlete,” four-time Ohio Athletic Conference champion and four-time national qualifier in triple jump, two-time “Most Outstanding Field Athlete,” and All-OAC in long jump. Bailey’s student activities included membership in the Multicultural Association of Students and the Black Student Union. Source: Franklin College Athletics

The college’s intramural basketball said. teams can add another chapter to the In the men’s books after the season ended earlier basketball leagues, this week. there are about 15Both IM basketball leagues, 20 student coaches, women’s and men’s, finished their in addition to the season with league championships students who play. Monday. Having an A league “I enjoyed [playing] this year,” said and a B league allows junior Garrett Tuley. “I hated how students who are some games got cancelled but it was more serious about still a fun time.” the sport to play at With the season over, Tuley is a more competitive already looking forward to his last level than those who season as a senior. are less serious about “I will definitely play next year,” he intramural sports. Photo submitted by Spencer Fox said. “I love to play basketball, and The popularity IM IMs are definitely an enjoyable time.” sports has gained The back-to-back champions pose for a photo after the championships game Tuley, like several other students, is larger than Monday. said he joined IM basketball for pure sophomore John not allowed to participate on an enjoyment and time Ward expected. In his intramural team. Similarly, football with his friends. He first days on campus players are also not permitted to called it a popular as a freshman, he was play intramural football. However, activity because it already being asked as in Ward’s case, if a student plays gives students an to join. football, but wants to play intramural outlet to play and “Apparently it’s basketball, then the student can. compete against one a really a big thing “It’s a competition kind-of-thing,” another while having here,” Ward said. “IM Ward said. “Obviously you’d be fun. isn’t until March and better at basketball because that’s Junior Darrell they were asking me what you came to do. It would take Crenshaw described in August.” the fun out of it.” IM basketball as a Head football Ward encourages more people to way for both men and coach Mike Leonard join intramural sports, calling it a women who don’t even recommends stress reliever. play basketball to being involved in IM “If you don’t have anything else to play competitively. because it keeps his do — if you don’t have a sport and – John Ward, sophomore “IM basketball is athletes in shape, you don’t have to practice — this is just a chance for according to Ward. a good workout,” Ward said. “It’s a ladies and gentlemen who do not Because intramural basketball good release. It gives you something play basketball to form a team and is oftentimes considered a leisure to do outside of homework.” have fun and also have a competitive sport, Ward said Franklin College league and tournament,” Crenshaw basketball team members are