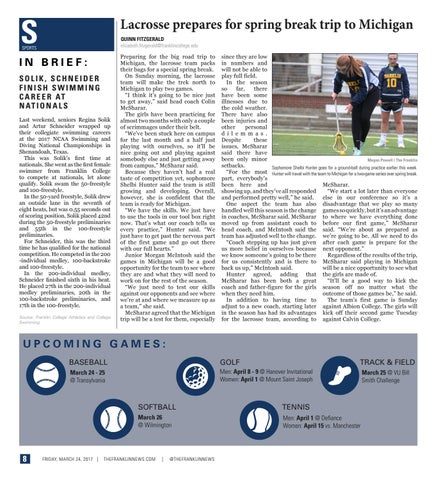 Preparing for the big road trip to Michigan, the lacrosse team packs their bags for a special spring break. On Sunday morning, the lacrosse team will make the trek north to Michigan to play two games. “I think it’s going to be nice just to get away,” said head coach Colin McSharar. The girls have been practicing for almost two months with only a couple of scrimmages under their belt. “We’ve been stuck here on campus for the last month and a half just playing with ourselves, so it’ll be nice going out and playing against somebody else and just getting away from campus,” McSharar said. Because they haven’t had a real taste of competition yet, sophomore Shelbi Hunter said the team is still growing and developing. Overall, however, she is confident that the team is ready for Michigan. “We have the skills. We just have to use the tools in our tool box right now. That’s what our coach tells us every practice,” Hunter said. “We just have to get past the nervous part of the first game and go out there with our full hearts.” Junior Morgan McIntosh said the games in Michigan will be a good opportunity for the team to see where they are and what they will need to work on for the rest of the season. “We just need to test our skills against our opponents and see where we’re at and where we measure up as a team,” she said. McSharar agreed that the Michigan trip will be a test for them, especially

SOLIK, SCHNEIDER FINISH SWIMMING C A R E E R AT N AT I O N A L S Last weekend, seniors Regina Solik and Artur Schneider wrapped up their collegiate swimming careers at the 2017 NCAA Swimming and Diving National Championships in Shenandoah, Texas. This was Solik’s first time at nationals. She went as the first female swimmer from Franklin College to compete at nationals, let alone qualify. Solik swam the 50-freestyle and 100-freestyle. In the 50-yard freestyle, Solik drew an outside lane in the seventh of eight heats, but was 0.55 seconds out of scoring position. Solik placed 42nd during the 50-freestyle preliminaries and 55th in the 100-freestyle preliminaries. For Schneider, this was the third time he has qualified for the national competition. He competed in the 200 -individual medley, 100-backstroke and 100-freestyle. In the 200-individual medley, Schneider finished sixth in his heat. He placed 27th in the 200-individual medley preliminaries, 20th in the 100-backstroke preliminaries, and 17th in the 100-freestyle. Source: Franklin College Athletics and College Swimming

since they are low in numbers and will not be able to play full field. In the season so far, there have been some illnesses due to the cold weather. There have also been injuries and other personal d i l e m m a s . Despite these issues, McSharar said there have been only minor Megan Powell | The Franklin setbacks. Sophomore Shelbi Hunter goes for a ground-ball during practice earlier this week. “For the most Hunter will travel with the team to Michigan for a two-game series over spring break. part, everybody’s McSharar. been here and “We start a lot later than everyone showing up, and they’ve all responded else in our conference so it’s a and performed pretty well,” he said. One aspect the team has also disadvantage that we play so many handled well this season is the change games so quickly, but it’s an advantage in coaches, McSharar said. McSharar to where we have everything done moved up from assistant coach to before our first game,” McSharar head coach, and McIntosh said the said. “We’re about as prepared as team has adjusted well to the change. we’re going to be. All we need to do “Coach stepping up has just given after each game is prepare for the us more belief in ourselves because next opponent.” Regardless of the results of the trip, we know someone’s going to be there for us consistently and is there to McSharar said playing in Michigan will be a nice opportunity to see what back us up,” McIntosh said. Hunter agreed, adding that the girls are made of. “It’ll be a good way to kick the McSharar has been both a great coach and father-figure for the girls season off no matter what the outcome of those games be,” he said. when they need him. The team’s first game is Sunday In addition to having time to adjust to a new coach, starting later against Albion College. The girls will in the season has had its advantages kick off their second game Tuesday for the lacrosse team, according to against Calvin College.