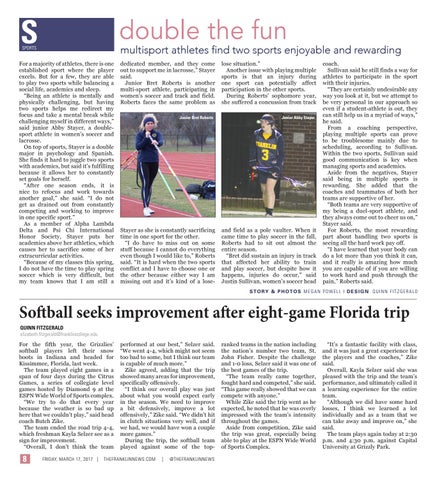 For a majority of athletes, there is one established sport where the player excels. But for a few, they are able to play two sports while balancing a social life, academics and sleep. “Being an athlete is mentally and physically challenging, but having two sports helps me redirect my focus and take a mental break while challenging myself in different ways,” said junior Abby Stayer, a doublesport athlete in women’s soccer and lacrosse. On top of sports, Stayer is a double major in psychology and Spanish. She finds it hard to juggle two sports with academics, but said it’s fulfilling because it allows her to constantly set goals for herself. “After one season ends, it is nice to refocus and work towards another goal,” she said. “I do not get as drained out from constantly competing and working to improve in one specific sport.” As a member of Alpha Lambda Delta and Psi Chi International Honor Society, Stayer puts her academics above her athletics, which causes her to sacrifice some of her extracurricular activities. “Because of my classes this spring, I do not have the time to play spring soccer which is very difficult, but my team knows that I am still a

dedicated member, and they come out to support me in lacrosse,” Stayer said. Junior Bret Roberts is another multi-sport athlete, participating in women’s soccer and track and field. Roberts faces the same problem as

Stayer as she is constantly sacrificing time in one sport for the other. “I do have to miss out on some stuff because I cannot do everything even though I would like to,” Roberts said. “It is hard when the two sports conflict and I have to choose one or the other because either way I am missing out and it’s kind of a lose-

lose situation.” Another issue with playing multiple sports is that an injury during one sport can potentially affect participation in the other sports. During Roberts’ sophomore year, she suffered a concussion from track Junior Abby Stayer

and field as a pole vaulter. When it came time to play soccer in the fall, Roberts had to sit out almost the entire season. “Bret did sustain an injury in track that affected her ability to train and play soccer, but despite how it happens, injuries do occur,” said Justin Sullivan, women’s soccer head

coach. Sullivan said he still finds a way for athletes to participate in the sport with their injuries. “They are certainly undesirable any way you look at it, but we attempt to be very personal in our approach so even if a student-athlete is out, they can still help us in a myriad of ways,” he said. From a coaching perspective, playing multiple sports can prove to be troublesome mainly due to scheduling, according to Sullivan. Within the two sports, Sullivan said good communication is key when managing sports and academics. Aside from the negatives, Stayer said being in multiple sports is rewarding. She added that the coaches and teammates of both her teams are supportive of her. “Both teams are very supportive of my being a duel-sport athlete, and they always come out to cheer us on,” Stayer said. For Roberts, the most rewarding part about handling two sports is seeing all the hard work pay off. “I have learned that your body can do a lot more than you think it can, and it really is amazing how much you are capable of if you are willing to work hard and push through the pain,” Roberts said.

For the fifth year, the Grizzlies’ softball players left their snow boots in Indiana and headed for Kissimmee, Florida, last week. The team played eight games in a span of four days during the Citrus Games, a series of collegiate level games hosted by Diamond 9 at the ESPN Wide World of Sports complex. “We try to do that every year because the weather is so bad up here that we couldn’t play,” said head coach Butch Zike. The team ended the road trip 4-4, which freshman Kayla Selzer see as a sign for improvement. “Overall, I don’t think the team

performed at our best,” Selzer said. “We went 4-4, which might not seem too bad to some, but I think our team is capable of much more.” Zike agreed, adding that the trip showed many areas for improvement, specifically offensively. “I think our overall play was just about what you would expect early in the season. We need to improve a bit defensively, improve a lot offensively,” Zike said. “We didn’t hit in clutch situations very well, and if we had, we would have won a couple more games.” During the trip, the softball team played against some of the top-

ranked teams in the nation including the nation’s number two team, St. John Fisher. Despite the challenge and 1-0 loss, Selzer said it was one of the best games of the trip. “The team really came together, fought hard and competed,” she said. “This game really showed that we can compete with anyone.” While Zike said the trip went as he expected, he noted that he was overly impressed with the team’s intensity throughout the games. Aside from competition, Zike said the trip was great, especially being able to play at the ESPN Wide World of Sports Complex.

“It’s a fantastic facility with class, and it was just a great experience for the players and the coaches,” Zike said. Overall, Kayla Selzer said she was pleased with the trip and the team’s performance, and ultimately called it a learning experience for the entire team. “Although we did have some hard losses, I think we learned a lot individually and as a team that we can take away and improve on,” she said. The team plays again today at 2:30 p.m. and 4:30 p.m. against Capital University at Grizzly Park.