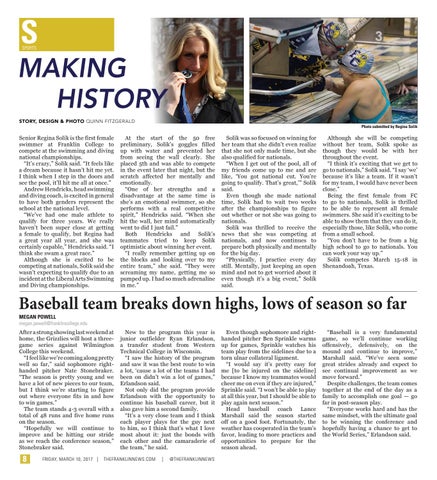 Senior Regina Solik is the first female swimmer at Franklin College to compete at the swimming and diving national championships. “It’s crazy,” Solik said. “It feels like a dream because it hasn’t hit me yet. I think when I step in the doors and see the pool, it’ll hit me all at once.” Andrew Hendricks, head swimming and diving coach, is excited in general to have both genders represent the school at the national level. “We’ve had one male athlete to qualify for three years. We really haven’t been super close at getting a female to qualify, but Regina had a great year all year, and she was certainly capable,” Hendricks said. “I think she swam a great race.” Although she is excited to be competing at nationals, Solik said she wasn’t expecting to qualify due to an incident at the Liberal Arts Swimming and Diving championships.

At the start of the 50 free preliminary, Solik’s goggles filled up with water and prevented her from seeing the wall clearly. She placed 5th and was able to compete in the event later that night, but the scratch affected her mentally and emotionally. “One of her strengths and a disadvantage at the same time is she’s an emotional swimmer, so she performs with a real competitive spirit,” Hendricks said. “When she hit the wall, her mind automatically went to did I just fail.” Both Hendricks and Solik’s teammates tried to keep Solik optimistic about winning her event. “I really remember getting up on the blocks and looking over to my entire team,” she said. “They were screaming my name, getting me so pumped up. I had so much adrenaline in me.”

Solik was so focused on winning for her team that she didn’t even realize that she not only made time, but she also qualified for nationals. “When I get out of the pool, all of my friends come up to me and are like, ‘You got national cut. You’re going to qualify. That’s great,’” Solik said. Even though she made national time, Solik had to wait two weeks after the championships to figure out whether or not she was going to nationals. Solik was thrilled to receive the news that she was competing at nationals, and now continues to prepare both physically and mentally for the big day. “Physically, I practice every day still. Mentally, just keeping an open mind and not to get worried about it even though it’s a big event,” Solik said.

Although she will be competing without her team, Solik spoke as though they would be with her throughout the event. “I think it’s exciting that we get to go to nationals,” Solik said. “I say ‘we’ because it’s like a team. If it wasn’t for my team, I would have never been close.” Being the first female from FC to go to nationals, Solik is thrilled to be able to represent all female swimmers. She said it’s exciting to be able to show them that they can do it, especially those, like Solik, who come from a small school. “You don’t have to be from a big high school to go to nationals. You can work your way up.” Solik competes March 15-18 in Shenandoah, Texas.

After a strong showing last weekend at home, the Grizzlies will host a threegame series against Wilmington College this weekend. “I feel like we’re coming along pretty well so far,” said sophomore righthanded pitcher Nate Stonebraker. “The season is pretty young and we have a lot of new pieces to our team, but I think we’re starting to figure out where everyone fits in and how to win games.” The team stands 4-3 overall with a total of 48 runs and five home runs on the season. “Hopefully we will continue to improve and be hitting our stride as we reach the conference season,” Stonebraker said.

New to the program this year is junior outfielder Ryan Erlandson, a transfer student from Western Technical College in Wisconsin. “I saw the history of the program and saw it was the best route to win a lot, ‘cause a lot of the teams I had been on didn’t win a lot of games,” Erlandson said. Not only did the program provide Erlandson with the opportunity to continue his baseball career, but it also gave him a second family. “It’s a very close team and I think each player plays for the guy next to him, so I think that’s what I love most about it: just the bonds with each other and the camaraderie of the team,” he said.

Even though sophomore and righthanded pitcher Ben Sprinkle warms up for games, Sprinkle watches his team play from the sidelines due to a torn ulnar collateral ligament. “I would say it’s pretty easy for me [to be injured on the sideline] because I know my teammates would cheer me on even if they are injured,” Sprinkle said. “I won’t be able to play at all this year, but I should be able to play again next season.” Head baseball coach Lance Marshall said the season started off on a good foot. Fortunately, the weather has cooperated in the team’s favor, leading to more practices and opportunities to prepare for the season ahead.

“Baseball is a very fundamental game, so we’ll continue working offensively, defensively, on the mound and continue to improve,” Marshall said. “We’ve seen some great strides already and expect to see continual improvement as we move forward.” Despite challenges, the team comes together at the end of the day as a family to accomplish one goal — go far in post-season play. “Everyone works hard and has the same mindset, with the ultimate goal to be winning the conference and hopefully having a chance to get to the World Series,” Erlandson said.