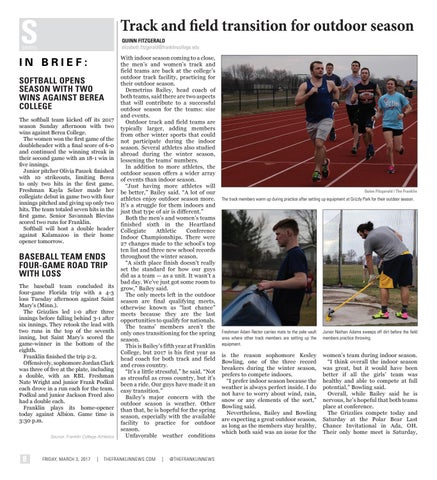 With indoor season coming to a close, the men’s and women’s track and field teams are back at the college’s outdoor track facility, practicing for their outdoor season. Demetrius Bailey, head coach of both teams, said there are two aspects that will contribute to a successful outdoor season for the teams: size and events. Outdoor track and field teams are typically larger, adding members from other winter sports that could not participate during the indoor season. Several athletes also studied abroad during the winter season, lessening the teams’ numbers. In addition to more athletes, the outdoor season offers a wider array of events than indoor season. “Just having more athletes will be better,” Bailey said. “A lot of our athletes enjoy outdoor season more. It’s a struggle for them indoors and just that type of air is different.” Both the men’s and women’s teams finished sixth in the Heartland Collegiate Athletic Conference Indoor Championships. There were 27 changes made to the school’s top ten list and three new school records throughout the winter season. “A sixth place finish doesn’t really set the standard for how our guys did as a team — as a unit. It wasn’t a bad day. We’ve just got some room to grow,” Bailey said. The only meets left in the outdoor season are final qualifying meets, otherwise known as “last chance” meets because they are the last opportunities to qualify for nationals. The teams’ members aren’t the only ones transitioning for the spring season. This is Bailey’s fifth year at Franklin College, but 2017 is his first year as head coach for both track and field and cross country. “It’s a little stressful,” he said. “Not as stressful as cross country, but it’s been a ride. Our guys have made it an easy transition.” Bailey’s major concern with the outdoor season is weather. Other than that, he is hopeful for the spring season, especially with the available facility to practice for outdoor season. Unfavorable weather conditions

SOFTBALL OPENS SEASON WITH TWO WINS AGAINST BEREA COLLEGE The softball team kicked off its 2017 season Sunday afternoon with two wins against Berea College. The women won the first game of the doubleheader with a final score of 6-0 and continued the winning streak in their second game with an 18-1 win in five innings. Junior pitcher Olivia Paszek finished with 10 strikeouts, limiting Berea to only two hits in the first game. Freshman Kayla Selzer made her collegiate debut in game two with four innings pitched and giving up only two hits. The team totaled seven hits in the first game. Senior Savannah Blevins scored two runs for Franklin. Softball will host a double header against Kalamazoo in their home opener tomorrow.

BASEBALL TEAM ENDS FOUR-GAME ROAD TRIP WITH LOSS The baseball team concluded its four-game Florida trip with a 4-3 loss Tuesday afternoon against Saint Mary’s (Minn.). The Grizzlies led 1-0 after three innings before falling behind 3-1 after six innings. They retook the lead with two runs in the top of the seventh inning, but Saint Mary’s scored the game-winner in the bottom of the eighth. Franklin finished the trip 2-2. Offensively, sophomore Jordan Clark was three of five at the plate, including a double, with an RBI. Freshman Nate Wright and junior Frank Podkul each drove in a run each for the team. Podkul and junior Jackson Freed also had a double each. Franklin plays its home-opener today against Albion. Game time is 3:30 p.m. Source: Franklin College Athletics

The track members warm up during practice after setting up equipment at Grizzly Park for their outdoor season.

Freshman Adam Rector carries mats to the pole vault area where other track members are setting up the equipment.

is the reason sophomore Kesley Bowling, one of the three record breakers during the winter season, prefers to compete indoors. “I prefer indoor season because the weather is always perfect inside. I do not have to worry about wind, rain, snow or any elements of the sort,” Bowling said. Nevertheless, Bailey and Bowling are expecting a great outdoor season, as long as the members stay healthy, which both said was an issue for the

women’s team during indoor season. “I think overall the indoor season was great, but it would have been better if all the girls’ team was healthy and able to compete at full potential,” Bowling said. Overall, while Bailey said he is nervous, he’s hopeful that both teams place at conference. The Grizzlies compete today and Saturday at the Polar Bear Last Chance Invitational in Ada, OH. Their only home meet is Saturday,