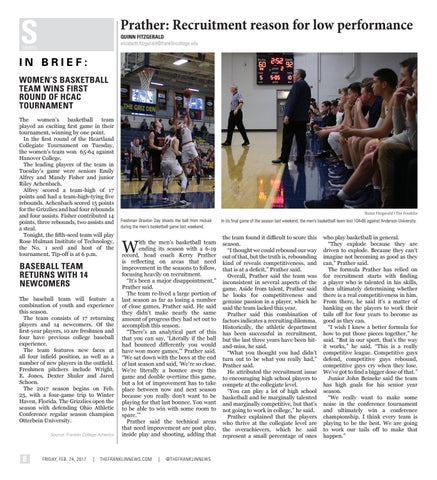 IN BRIEF: WOMEN’S BASKETBALL TEAM WINS FIRST ROUND OF HCAC TOURNAMENT The women’s basketball team played an exciting first game in their tournament, winning by one point. In the first round of the Heartland Collegiate Tournament on Tuesday, the women’s team won 65-64 against Hanover College. The leading players of the team in Tuesday’s game were seniors Emily Alfrey and Mandy Fisher and junior Riley Achenbach. Alfrey scored a team-high of 17 points and had a team-high-tying five rebounds. Achenbach scored 15 points for the Grizzlies and had four rebounds and four assists. Fisher contributed 14 points, three rebounds, two assists and a steal. Tonight, the fifth-seed team will play Rose Hulman Institute of Technology, the No. 1 seed and host of the tournament. Tip-off is at 6 p.m.

BASEBALL TEAM RETURNS WITH 14 NEWCOMERS The baseball team will feature a combination of youth and experience this season. The team consists of 17 returning players and 14 newcomers. Of the first-year players, 10 are freshmen and four have previous college baseball experience. The team features new faces at all four infield position, as well as a number of new players in the outfield. Freshmen pitchers include Wright, E. Jones, Dexter Shuler and Jared Schoen. The 2017 season begins on Feb. 25, with a four-game trip to Winter Haven, Florida. The Grizzlies open the season with defending Ohio Athletic Conference regular season champion Otterbein University. Source: Franklin College Athletics

In its final game of the season last weekend, the men’s basketball team lost 104-66 against Anderson University.

the team found it difficult to score this season. “I thought we could rebound our way out of that, but the truth is, rebounding kind of reveals competitiveness, and that is at a deficit,” Prather said. Overall, Prather said the team was inconsistent in several aspects of the game. Aside from talent, Prather said he looks for competitiveness and genuine passion in a player, which he said the team lacked this year. Prather said this combination of factors indicates a recruiting dilemma. Historically, the athletic department has been successful in recruitment, but the last three years have been hitand-miss, he said. “What you thought you had didn’t turn out to be what you really had,” Prather said. He attributed the recruitment issue to encouraging high school players to compete at the collegiate level. “You can play a lot of high school basketball and be marginally talented and marginally competitive, but that’s not going to work in college,” he said. Prather explained that the players who thrive at the collegiate level are the overachievers, which he said represent a small percentage of ones

ith the men’s basketball team ending its season with a 6-19 record, head coach Kerry Prather is reflecting on areas that need improvement in the seasons to follow, focusing heavily on recruitment. “It’s been a major disappointment,” Prather said. The team re-lived a large portion of last season as far as losing a number of close games, Prather said. He said they didn’t make nearly the same amount of progress they had set out to accomplish this season. “There’s an analytical part of this that you can say, ‘Literally if the ball had bounced differently you would have won more games,’” Prather said. “We sat down with the boys at the end of last season and said, ‘We’re so close. We’re literally a bounce away this game and double overtime this game, but a lot of improvement has to take place between now and next season because you really don’t want to be playing for that last bounce. You want to be able to win with some room to spare.’” Prather said the technical areas that need improvement are post play, inside play and shooting, adding that

who play basketball in general. “They explode because they are driven to explode. Because they can’t imagine not becoming as good as they can,” Prather said. The formula Prather has relied on for recruitment starts with finding a player who is talented in his skills, then ultimately determining whether there is a real competitiveness in him. From there, he said it’s a matter of banking on the players to work their tails off for four years to become as good as they can. “I wish I knew a better formula for how to put those pieces together,” he said. “But in our sport, that’s the way it works,” he said. “This is a really competitive league. Competitive guys defend, competitive guys rebound, competitive guys cry when they lose. We’ve got to find a bigger dose of that.” Junior John Beineke said the team has high goals for his senior year season. “We really want to make some noise in the conference tournament and ultimately win a conference championship. I think every team is playing to be the best. We are going to work our tails off to make that happen.”