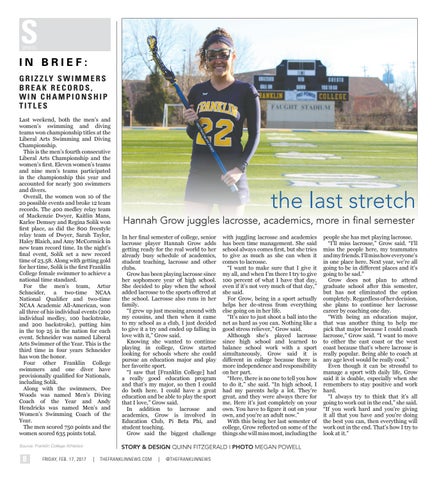 IN BRIEF: G R I Z Z LY S W I M M E R S BREAK RECORDS, WIN CHAMPIONSHIP TITLES Last weekend, both the men’s and women’s swimming and diving teams won championship titles at the Liberal Arts Swimming and Diving Championship. This is the men’s fourth consecutive Liberal Arts Championship and the women’s first. Eleven women’s teams and nine men’s teams participated in the championship this year and accounted for nearly 300 swimmers and divers. Overall, the women won 10 of the 20 possible events and broke 12 team records. The 400 medley relay team of Mackenzie Dwyer, Kaitlin Mans, Karlee Demsey and Regina Solik won first place, as did the 800 freestyle relay team of Dwyer, Sarah Taylor, Haley Blaich, and Amy McCormick in new team record time. In the night’s final event, Solik set a new record time of 23.58. Along with getting gold for her time, Solik is the first Franklin College female swimmer to achieve a national time standard. For the men’s team, Artur Schneider, a two-time NCAA National Qualifier and two-time NCAA Academic All-American, won all three of his individual events (200 individual medley, 100 backstroke, and 200 backstroke), putting him in the top 25 in the nation for each event. Schneider was named Liberal Arts Swimmer of the Year. This is the third time in four years Schneider has won the honor. Four other Franklin College swimmers and one diver have provisionally qualified for Nationals, including Solik. Along with the swimmers, Dee Woods was named Men’s Diving Coach of the Year and Andy Hendricks was named Men’s and Women’s Swimming Coach of the Year. The men scored 750 points and the women scored 635 points total. Source: Franklin College Athletics

the last stretch Hannah Grow juggles lacrosse, academics, more in final semester In her final semester of college, senior lacrosse player Hannah Grow adds getting ready for the real world to her already busy schedule of academics, student teaching, lacrosse and other clubs. Grow has been playing lacrosse since her sophomore year of high school. She decided to play when the school added lacrosse to the sports offered at the school. Lacrosse also runs in her family. “I grew up just messing around with my cousins, and then when it came to my school as a club, I just decided to give it a try and ended up falling in love with it,” Grow said. Knowing she wanted to continue playing in college, Grow started looking for schools where she could pursue an education major and play her favorite sport. “I saw that [Franklin College] had a really good education program and that’s my major, so then I could do both here. I could have a great education and be able to play the sport that I love,” Grow said. In addition to lacrosse and academics, Grow is involved in Education Club, Pi Beta Phi, and student teaching. Grow said the biggest challenge

with juggling lacrosse and academics has been time management. She said school always comes first, but she tries to give as much as she can when it comes to lacrosse. “I want to make sure that I give it my all, and when I’m there I try to give 100 percent of what I have that day, even if it’s not very much of that day,” she said. For Grow, being in a sport actually helps her de-stress from everything else going on in her life. “It’s nice to just shoot a ball into the net as hard as you can. Nothing like a good stress reliever,” Grow said. Although she’s played lacrosse since high school and learned to balance school work with a sport simultaneously, Grow said it is different in college because there is more independence and responsibility on her part. “Here, there is no one to tell you how to do it,” she said. “In high school, I had my parents help a lot. They’re great, and they were always there for me. Here it’s just completely on your own. You have to figure it out on your own, and you’re an adult now.” With this being her last semester of college, Grow reflected on some of the things she will miss most, including the

people she has met playing lacrosse. “I’ll miss lacrosse,” Grow said. “I’ll miss the people here, my teammates and my friends. I’ll miss how everyone’s in one place here. Next year, we’re all going to be in different places and it’s going to be sad.” Grow does not plan to attend graduate school after this semester, but has not eliminated the option completely. Regardless of her decision, she plans to continue her lacrosse career by coaching one day. “With being an education major, that was another thing to help me pick that major because I could coach lacrosse,” Grow said. “I want to move to either the east coast or the west coast because that’s where lacrosse is really popular. Being able to coach at any age level would be really cool.” Even though it can be stressful to manage a sport with daily life, Grow said it is doable, especially when she remembers to stay positive and work hard. “I always try to think that it’s all going to work out in the end,” she said. “If you work hard and you’re giving it all that you have and you’re doing the best you can, then everything will work out in the end. That’s how I try to look at it.”