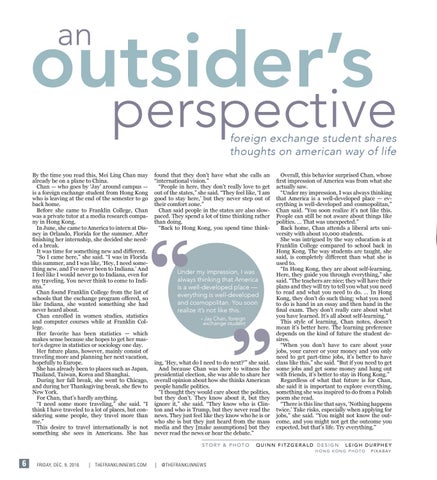 By the time you read this, Mei Ling Chan may already be on a plane to China. Chan — who goes by ‘Jay’ around campus — is a foreign exchange student from Hong Kong who is leaving at the end of the semester to go back home. Before she came to Franklin College, Chan was a private tutor at a media research company in Hong Kong. In June, she came to America to intern at Disney in Orlando, Florida for the summer. After finishing her internship, she decided she needed a break. It was time for something new and different. “So I came here,” she said. “I was in Florida this summer, and I was like, ‘Hey, I need something new, and I’ve never been to Indiana.’ And I feel like I would never go to Indiana, even for my traveling. You never think to come to Indiana.” Chan found Franklin College from the list of schools that the exchange program offered, so like Indiana, she wanted something she had never heard about. Chan enrolled in women studies, statistics and computer courses while at Franklin College. Her favorite has been statistics — which makes sense because she hopes to get her master’s degree in statistics or sociology one day. Her future plans, however, mainly consist of traveling more and planning her next vacation, hopefully to Europe. She has already been to places such as Japan, Thailand, Taiwan, Korea and Shanghai. During her fall break, she went to Chicago, and during her Thanksgiving break, she flew to New York. For Chan, that’s hardly anything. “I need some more traveling,” she said. “I think I have traveled to a lot of places, but considering some people, they travel more than me.” This desire to travel internationally is not something she sees in Americans. She has

found that they don’t have what she calls an “international vision.” “People in here, they don’t really love to get out of the states,” she said. “They feel like, ‘I am good to stay here,’ but they never step out of their comfort zone.” Chan said people in the states are also slowpaced. They spend a lot of time thinking rather than doing. “Back to Hong Kong, you spend time think-

Under my impression, I was always thinking that America is a well-developed place — everything is well-developed and cosmopolitan. You soon realize it’s not like this. - Jay Chan, foreign exchange student

ing, ‘Hey, what do I need to do next?’” she said. And because Chan was here to witness the presidential election, she was able to share her overall opinion about how she thinks American people handle politics. “I thought they would care about the politics, but they don’t. They know about it, but they ignore it,” she said. “They know who is Clinton and who is Trump, but they never read the news. They just feel like they know who he is or who she is but they just heard from the mass media and they [make assumptions] but they never read the news or hear the debate.” STORY & PHOTO

Overall, this behavior surprised Chan, whose first impression of America was from what she actually saw. “Under my impression, I was always thinking that America is a well-developed place — everything is well-developed and cosmopolitan,” Chan said. “You soon realize it’s not like this. People can still be not aware about things like politics. … That was unexpected.” Back home, Chan attends a liberal arts university with about 10,000 students. She was intrigued by the way education is at Franklin College compared to school back in Hong Kong. The way students are taught, she said, is completely different than what she is used to. “In Hong Kong, they are about self-learning. Here, they guide you through everything,” she said. “The teachers are nice; they will have their plans and they will try to tell you what you need to read and what you need to do. … In Hong Kong, they don’t do such thing; what you need to do is hand in an essay and then hand in the final exam. They don’t really care about what you have learned. It’s all about self-learning.” This style of learning, Chan notes, doesn’t mean it’s better here. The learning preference depends on the kind of future the student desires. “When you don’t have to care about your jobs, your career or your money and you only need to get part-time jobs, it’s better to have class like this,” she said. “But if you need to get some jobs and get some money and hang out with friends, it’s better to stay in Hong Kong.” Regardless of what that future is for Chan, she said it is important to explore everything, something she was inspired to do from a Polish poem she read. “There is this line that says, ‘Nothing happens twice.’ Take risks, especially when applying for jobs,” she said. “You might not know the outcome, and you might not get the outcome you expected, but that’s life. Try everything.”