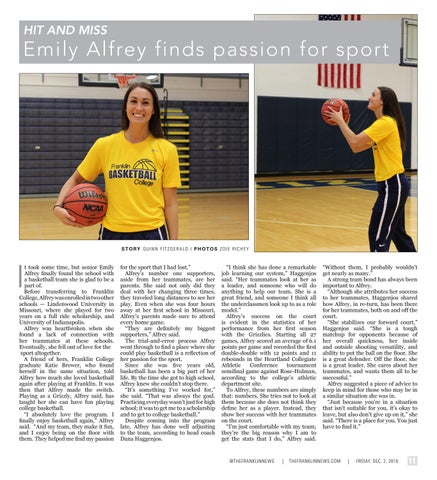 t took some time, but senior Emily Alfrey finally found the school with a basketball team she is glad to be a part of. Before transferring to Franklin College, Alfrey was enrolled in two other schools — Lindenwood University in Missouri, where she played for two years on a full ride scholarship, and University of Indianapolis. Alfrey was heartbroken when she found a lack of connection with her teammates at these schools. Eventually, she fell out of love for the sport altogether. A friend of hers, Franklin College graduate Katie Brewer, who found herself in the same situation, told Alfrey how much she loved basketball again after playing at Franklin. It was then that Alfrey made the switch. Playing as a Grizzly, Alfrey said, has taught her she can have fun playing college basketball. “I absolutely love the program. I finally enjoy basketball again,” Alfrey said. “And my team, they make it fun, and I enjoy being on the floor with them. They helped me find my passion

for the sport that I had lost.” Alfrey’s number one supporters, aside from her teammates, are her parents. She said not only did they deal with her changing three times, they traveled long distances to see her play. Even when she was four hours away at her first school in Missouri, Alfrey’s parents made sure to attend every home game. “They are definitely my biggest supporters,” Alfrey said. The trial-and-error process Alfrey went through to find a place where she could play basketball is a reflection of her passion for the sport. Since she was five years old, basketball has been a big part of her life. By the time she got to high school, Alfrey knew she couldn’t stop there. “It’s something I’ve worked for,” she said. “That was always the goal. Practicing everyday wasn’t just for high school; it was to get me to a scholarship and to get to college basketball.” Despite coming into the program late, Alfrey has done well adjusting to the team, according to head coach Dana Haggenjos.

“I think she has done a remarkable job learning our system,” Haggenjos said. “Her teammates look at her as a leader, and someone who will do anything to help our team. She is a great friend, and someone I think all the underclassmen look up to as a role model.” Alfrey’s success on the court is evident in the statistics of her performance from her first season with the Grizzlies. Starting all 27 games, Alfrey scored an average of 6.1 points per game and recorded the first double-double with 12 points and 11 rebounds in the Heartland Collegiate Athletic Conference tournament semifinal game against Rose-Hulman, according to the college’s athletic department site. To Alfrey, these numbers are simply that: numbers. She tries not to look at them because she does not think they define her as a player. Instead, they show her success with her teammates on the court. “I’m just comfortable with my team; they’re the big reason why I am to get the stats that I do,” Alfrey said.

“Without them, I probably wouldn’t get nearly as many.” A strong team bond has always been important to Alfrey. “Although she attributes her success to her teammates, Haggenjos shared how Alfrey, in re-turn, has been there for her teammates, both on and off the court. “She stabilizes our forward court,” Haggenjos said. “She is a tough matchup for opponents because of her overall quickness, her inside and outside shooting versatility, and ability to put the ball on the floor. She is a great defender. Off the floor, she is a great leader. She cares about her teammates, and wants them all to be successful.” Alfrey suggested a piece of advice to keep in mind for those who may be in a similar situation she was in. “Just because you’re in a situation that isn’t suitable for you, it’s okay to leave, but also don’t give up on it,” she said. “There is a place for you. You just have to find it.”