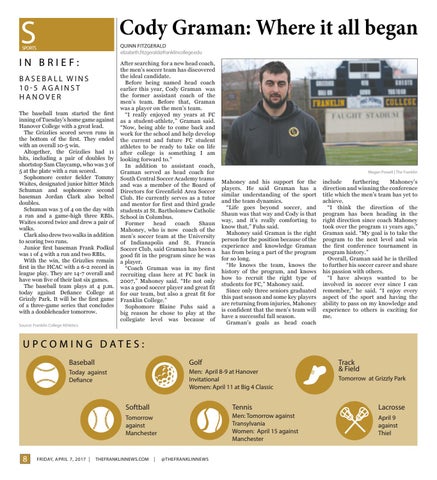 Cody Graman: Where it all began

IN BRIEF: BASEBALL WINS 10-5 AGAINST HANOVER The baseball team started the first inning of Tuesday’s home game against Hanover College with a great lead. The Grizzlies scored seven runs in the bottom of the first. They ended with an overall 10-5 win. Altogether, the Grizzlies had 11 hits, including a pair of doubles by shortstop Sam Claycamp, who was 3 of 5 at the plate with a run scored. Sophomore center fielder Tommy Waites, designated junior hitter Mitch Schuman and sophomore second baseman Jordan Clark also belted doubles. Schuman was 3 of 4 on the day with a run and a game-high three RBIs. Waites scored twice and drew a pair of walks. Clark also drew two walks in addition to scoring two runs. Junior first baseman Frank Podkul was 1 of 4 with a run and two RBIs. With the win, the Grizzlies remain first in the HCAC with a 6-2 record in league play. They are 14-7 overall and have won five of their last six games. The baseball team plays at 4 p.m. today against Defiance College at Grizzly Park. It will be the first game of a three-game series that concludes with a doubleheader tomorrow. Source: Franklin College Athletics

After searching for a new head coach, the men’s soccer team has discovered the ideal candidate. Before being named head coach earlier this year, Cody Graman was the former assistant coach of the men’s team. Before that, Graman was a player on the men’s team. “I really enjoyed my years at FC as a student-athlete,” Graman said. “Now, being able to come back and work for the school and help develop the current and future FC student athletes to be ready to take on life after college is something I am looking forward to.” In addition to assistant coach, Graman served as head coach for South Central Soccer Academy teams and was a member of the Board of Directors for Greenfield Area Soccer Club. He currently serves as a tutor and mentor for first and third grade students at St. Bartholomew Catholic School in Columbus. Former head coach Shaun Mahoney, who is now coach of the men’s soccer team at the University of Indianapolis and St. Francis Soccer Club, said Graman has been a good fit in the program since he was a player. “Coach Graman was in my first recruiting class here at FC back in 2007,” Mahoney said. “He not only was a good soccer player and great fit for our team, but also a great fit for Franklin College.” Sophomore Blaine Fuhs said a big reason he chose to play at the collegiate level was because of

Mahoney and his support for the players. He said Graman has a similar understanding of the sport and the team dynamics. “Life goes beyond soccer, and Shaun was that way and Cody is that way, and it’s really comforting to know that,” Fuhs said. Mahoney said Graman is the right person for the position because of the experience and knowledge Graman has from being a part of the program for so long. “He knows the team, knows the history of the program, and knows how to recruit the right type of students for FC,” Mahoney said. Since only three seniors graduated this past season and some key players are returning from injuries, Mahoney is confident that the men’s team will have a successful fall season. Graman’s goals as head coach

include furthering Mahoney’s direction and winning the conference title which the men’s team has yet to achieve. “I think the direction of the program has been heading in the right direction since coach Mahoney took over the program 11 years ago,” Graman said. “My goal is to take the program to the next level and win the first conference tournament in program history.” Overall, Graman said he is thrilled to further his soccer career and share his passion with others. “I have always wanted to be involved in soccer ever since I can remember,” he said. “I enjoy every aspect of the sport and having the ability to pass on my knowledge and experience to others is exciting for me.