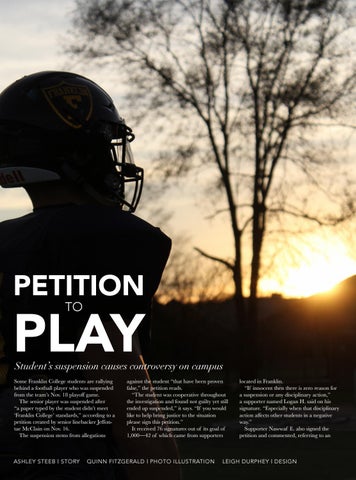 Some Franklin College students are rallying behind a football player who was suspended from the team’s Nov. 18 playoff game. The senior player was suspended after “a paper typed by the student didn’t meet ‘Franklin College’ standards,” according to a petition created by senior linebacker Jeffontae McClain on Nov. 16. The suspension stems from allegations

against the student “that have been proven false,” the petition reads. “The student was cooperative throughout the investigation and found not guilty yet still ended up suspended,” it says. “If you would like to help bring justice to the situation please sign this petition.” It received 76 signatures out of its goal of 1,000—42 of which came from supporters

located in Franklin. “If innocent then there is zero reason for a suspension or any disciplinary action,” a supporter named Logan H. said on his signature. “Especially when that disciplinary action affects other students in a negative way.” Supporter Nawwaf E. also signed the petition and commented, referring to an