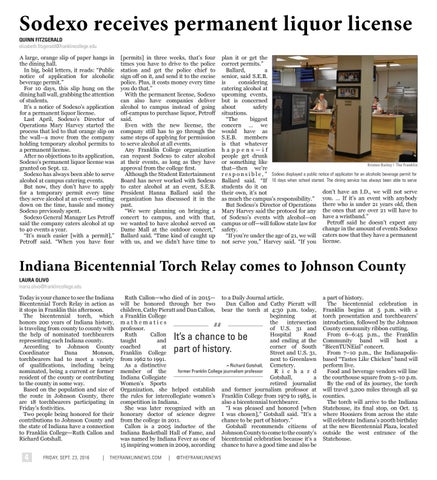 A large, orange slip of paper hangs in the dining hall. In big, bold letters, it reads: “Public notice of application for alcoholic beverage permit.” For 10 days, this slip hung on the dining hall wall, grabbing the attention of students. It’s a notice of Sodexo’s application for a permanent liquor license. Last April, Sodexo’s Director of Operations Mary Harvey started the process that led to that orange slip on the wall—a move from the company holding temporary alcohol permits to a permanent license. After no objections to its application, Sodexo’s permanent liquor license was granted on Sept. 12. Sodexo has always been able to serve alcohol at campus catering events. But now, they don’t have to apply for a temporary permit every time they serve alcohol at an event—cutting down on the time, hassle and money Sodexo previously spent. Sodexo General Manager Les Petroff said the company caters alcohol at up to 40 events a year. “It’s much easier [with a permit],” Petroff said. “When you have four

[permits] in three weeks, that’s four times you have to drive to the police station and get the police chief to sign off on it, and send it to the excise police. Plus, it costs money every time you do that.” With the permanent license, Sodexo can also have companies deliver alcohol to campus instead of going off-campus to purchase liquor, Petroff said. Even with the new license, the company still has to go through the same steps of applying for permission to serve alcohol at all events. Any Franklin College organization can request Sodexo to cater alcohol at their events, as long as they have approval from the college first. Although the Student Entertainment Board has never worked with Sodexo to cater alcohol at an event, S.E.B. President Hanna Ballard said the organization has discussed it in the past. “We were planning on bringing a concert to campus, and with that, we wanted to have alcohol served on Dame Mall at the outdoor concert,” Ballard said. “Time kind of caught up with us, and we didn’t have time to

plan it or get the correct permits.” Ballard, a senior, said S.E.B. is considering catering alcohol at upcoming events, but is concerned about safety situations. “The biggest concern … we would have as S.E.B. members is that whatever happens—if people get drunk or something like Kristen Bailey | The Franklin that—then we’re r e s p o n s i b l e , ” Sodexo displayed a public notice of applicaton for an alcoholic beverage permit for Ballard said. “If 10 days when school started. The dining service has always been able to serve students do it on don’t have an I.D., we will not serve their own, it’s not as much the campus’s responsibility.” you. … If it’s an event with anybody But Sodexo’s Director of Operations there who is under 21 years old, then Mary Harvey said the protocol for any the ones that are over 21 will have to of Sodexo’s events with alcohol—on have a wristband.” Petroff said he doesn’t expect any campus or off—will follow state law for change in the amount of events Sodexo safety. “If you’re under the age of 21, we will caters now that they have a permanent not serve you,” Harvey said. “If you license.

Today is your chance to see the Indiana Bicentennial Torch Relay in action as it stops in Franklin this afternoon. The bicentennial torch, which honors 200 years of Indiana history, is traveling from county to county with the help of nominated torchbearers representing each Indiana county. According to Johnson County Coordinator Dana Monson, torchbearers had to meet a variety of qualifications, including being nominated, being a current or former resident of the county or contributing to the county in some way. Based on the population and size of the route in Johnson County, there are 18 torchbearers participating in Friday’s festivities. Two people being honored for their contributions to Johnson County and the state of Indiana have a connection to Franklin College—Ruth Callon and Richard Gotshall.

Ruth Callon—who died of in 2015— to a Daily Journal article. will be honored through her two Dan Callon and Cathy Pieratt will children, Cathy Pieratt and Dan Callon, bear the torch at 4:30 p.m. today, a Franklin College beginning at mathematics the intersection professor. of U.S. 31 and Ruth Callon Hospital Road taught and and ending at the coached at corner of South Franklin College Street and U.S. 31, from 1962 to 1991. next to Greenlawn – Richard Gotshall, Cemetery. As a distinctive former Franklin College journalism professor member of the R i c h a r d Indiana Collegiate Gotshall, a Women’s Sports retired journalist Organization, she helped establish and former journalism professor at the rules for intercollegiate women’s Franklin College from 1979 to 1985, is competition in Indiana. also a bicentennial torchbearer. She was later recognized with an “I was pleased and honored [when honorary doctor of science degree I was chosen],” Gotshall said. “It’s a from the college in 2011. chance to be part of history.” Callon is a 2005 inductee of the Gotshall recommends citizens of Indiana Basketball Hall of Fame, and Johnson County to come to the county’s was named by Indiana Fever as one of bicentennial celebration because it’s a 15 inspiring women in 2009, according chance to have a good time and also be

It’s a chance to be part of history.

a part of history. The bicentennial celebration in Franklin begins at 5 p.m. with a torch presentation and torchbearers’ introduction, followed by the Johnson County community ribbon cutting. From 6–6:45 p.m., the Franklin Community band will host a “BicenTUNEial” concert. From 7–10 p.m., the Indianapolisbased “Tastes Like Chicken” band will perform live. Food and beverage vendors will line the courthouse square from 5–10 p.m. By the end of its journey, the torch will travel 3,200 miles through all 92 counties. The torch will arrive to the Indiana Statehouse, its final stop, on Oct. 15 where Hoosiers from across the state will celebrate Indiana’s 200th birthday at the new Bicentennial Plaza, located outside the west entrance of the Statehouse.