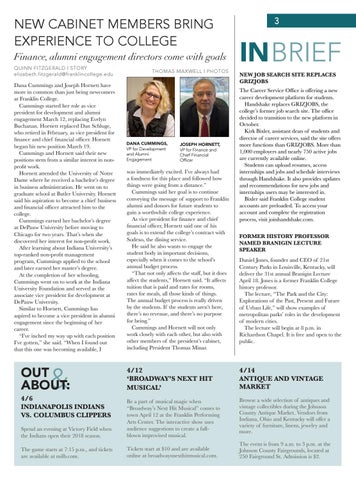 Dana Cummings and Joseph Hornett have more in common than just being newcomers at Franklin College. Cummings started her role as vice president for development and alumni engagement March 12, replacing Evelyn Buchanan. Hornett replaced Dan Schluge, who retired in February, as vice president for finance and chief financial officer. Hornett began his new position March 19. Cummings and Hornett said their new positions stem from a similar interest in nonprofit work. Hornett attended the University of Notre Dame where he received a bachelor’s degree in business administration. He went on to graduate school at Butler University. Hornett said his aspiration to become a chief business and financial officer attracted him to the college. Cummings earned her bachelor’s degree at DePauw University before moving to Chicago for two years. That’s when she discovered her interest for non-profit work. After learning about Indiana University’s top-ranked non-profit management program, Cummings applied to the school and later earned her master’s degree. At the completion of her schooling, Cummings went on to work at the Indiana University Foundation and served as the associate vice president for development at DePauw University. Similar to Hornett, Cummings has aspired to become a vice president in alumni engagement since the beginning of her career. “I’ve inched my way up with each position I’ve gotten,” she said. “When I found out that this one was becoming available, I

was immediately excited. I’ve always had a fondness for this place and followed how things were going from a distance.” Cummings said her goal is to continue conveying the message of support to Franklin alumni and donors for future students to gain a worthwhile college experience. As vice president for finance and chief financial officer, Hornett said one of his goals is to extend the college’s contract with Sodexo, the dining service. He said he also wants to engage the student body in important decisions, especially when it comes to the school’s annual budget process. “That not only affects the staff, but it does affect the students,” Hornett said. “It affects tuition that is paid and rates for rooms, rates for meals, all those kinds of things. The annual budget process is really driven by the students. If the students aren’t here, there’s no revenue, and there’s no purpose for being.” Cummings and Hornett will not only work closely with each other, but also with other members of the president’s cabinet, including President Thomas Minar.

The Career Service Office is offering a new career development platform for students. Handshake replaces GRIZJOBS, the college’s former job search site. The office decided to transition to the new platform in October. Kirk Bixler, assistant dean of students and director of career services, said the site offers more functions than GRIZJOBS. More than 1,000 employers and nearly 750 active jobs are currently available online. Students can upload resumes, access internships and jobs and schedule interviews through Handshake. It also provides updates and recommendations for new jobs and internships users may be interested in. Bixler said Franklin College student accounts are preloaded. To access your account and complete the registration process, visit joinhandshake.com. FORMER HISTORY PROFESSOR NAMED BRANIGIN LECTURE SPEAKER Daniel Jones, founder and CEO of 21st Century Parks in Louisville, Kentucky, will deliver the 31st annual Branigin Lecture April 18. Jones is a former Franklin College history professor. The lecture, “The Park and the City: Explorations of the Past, Present and Future of Urban Life,” will show examples of metropolitan parks’ roles in the development of modern cities. The lecture will begin at 8 p.m. in Richardson Chapel. It is free and open to the public.

Spend an evening at Victory Field when the Indians open their 2018 season.

Be a part of musical magic when “Broadway’s Next Hit Musical” comes to town April 12 at the Franklin Performing Arts Center. The interactive show uses audience suggestions to create a fullblown improvised musical.

Browse a wide selection of antiques and vintage collectibles during the Johnson County Antique Market. Vendors from Indiana, Ohio and Kentucky will offer a variety of furniture, linens, jewelry and more.

The game starts at 7:15 p.m., and tickets are available at milb.com.

Tickets start at $10 and are available online at broadwaysnexthitmusical.com.