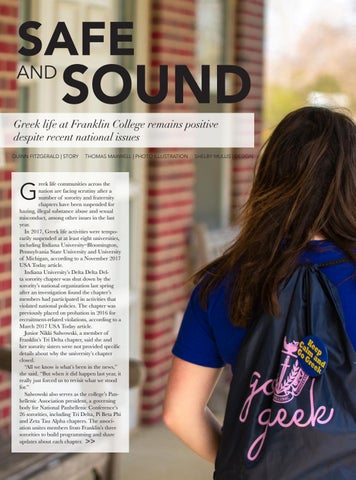 reek life communities across the nation are facing scrutiny after a number of sorority and fraternity chapters have been suspended for hazing, illegal substance abuse and sexual misconduct, among other issues in the last year. In 2017, Greek life activities were temporarily suspended at at least eight universities, including Indiana University–Bloomington, Pennsylvania State University and University of Michigan, according to a November 2017 USA Today article. Indiana University’s Delta Delta Delta sorority chapter was shut down by the sorority’s national organization last spring after an investigation found the chapter’s members had participated in activities that violated national policies. The chapter was previously placed on probation in 2016 for recruitment-related violations, according to a March 2017 USA Today article. Junior Nikki Salwowski, a member of Franklin’s Tri Delta chapter, said she and her sorority sisters were not provided specific details about why the university’s chapter closed. “All we know is what’s been in the news,” she said. “But when it did happen last year, it really just forced us to revisit what we stood for.” Salwowski also serves as the college’s Panhellenic Association president, a governing body for National Panhellenic Conference’s 26 sororities, including Tri Delta, Pi Beta Phi and Zeta Tau Alpha chapters. The association unites members from Franklin’s three sororities to build programming and share updates about each chapter. >>