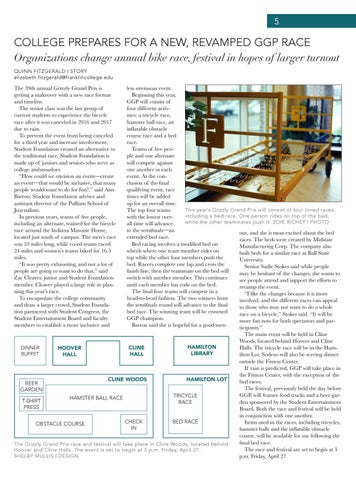 The 39th annual Grizzly Grand Prix is getting a makeover with a new race format and timeline. The senior class was the last group of current students to experience the bicycle race after it was canceled in 2016 and 2017 due to rain. To prevent the event from being canceled for a third year and increase involvement, Student Foundation created an alternative to the traditional race. Student Foundation is made up of juniors and seniors who serve as college ambassadors. “How could we envision an event—create an event—that would be inclusive, that many people would want to do for fun?,” said Ann Barton, Student Foundation adviser and assistant director of the Pulliam School of Journalism. In previous years, teams of five people, including an alternate, trained for the bicycle race around the Indiana Masonic Home, located just south of campus. The men’s race was 33 miles long, while co-ed teams raced 24 miles and women’s teams biked for 16.5 miles. “It was pretty exhausting, and not a lot of people are going to want to do that,” said Zac Cleaver, junior and Student Foundation member. Cleaver played a large role in planning this year’s race. To encapsulate the college community and draw a larger crowd, Student Foundation partnered with Student Congress, the Student Entertainment Board and faculty members to establish a more inclusive and

less strenuous event. Beginning this year, GGP will consist of four different activities: a tricycle race, hamster ball race, an inflatable obstacle course race and a bed race. Teams of five people and one alternate will compete against one another in each event. At the conclusion of the final qualifying event, race times will be added up for an overall time. This year’s Grizzly Grand Prix will consist of four timed races, The top four teams including a bed race. One person rides on top of the bed, with the lowest overwhile the other teammates push it. ZOIE RICHEY | PHOTO all time will advance to the semifinals—an out, and she is most excited about the bed extended bed race. races. The beds were created by Midstate Bed racing involves a modified bed on Manufacturing Corp. The company also wheels where one team member rides on built beds for a similar race at Ball State top while the other four members push the University. bed. Racers complete one lap and cross the Senior Sadie Stokes said while people finish line, then the teammate on the bed will may be hesitant of the changes, she wants to switch with another member. This continues see people attend and support the efforts to until each member has rode on the bed. revamp the event. The final four teams will compete in a “I like the changes because it is more head-to-head fashion. The two winners from involved, and the different races can appeal the semifinals round will advance to the final to those who may not want to do a whole bed race. The winning team will be crowned race on a bicycle,” Stokes said. “It will be GGP champion. more fun now for both spectators and parBarton said she is hopeful for a good turnticipants.”

The Grizzly Grand Prix race and festival will take place in Cline Woods, located behind Hoover and Cline Halls. The event is set to begin at 3 p.m. Friday, April 27. SHELBY MULLIS | DESIGN

The main event will be held in Cline Woods, located behind Hoover and Cline Halls. The tricycle race will be in the Hamilton Lot. Sodexo will also be serving dinner outside the Fitness Center. If rain is predicted, GGP will take place in the Fitness Center, with the exception of the bed races. The festival, previously held the day before GGP, will feature food trucks and a beer garden sponsored by the Student Entertainment Board. Both the race and festival will be held in conjunction with one another. Items used in the races, including tricycles, hamster balls and the inflatable obstacle course, will be available for use following the final bed race. The race and festival are set to begin at 3 p.m. Friday, April 27.