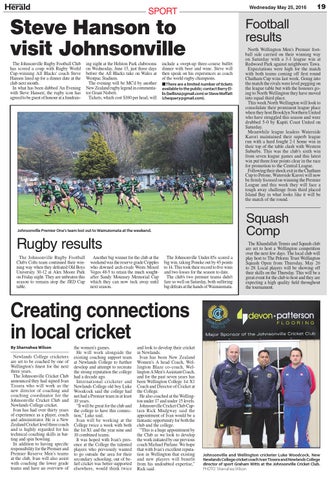 Steve Hanson to visit Johnsonville The Johnsonville Rugby Football Club has scored a coup with Rugby World Cup-winning All Blacks' coach Steve Hansen lined up for a dinner date at the club next month. In what has been dubbed 'An Evening with Steve Hansen', the rugby icon has agreed to be guest of honour at a fundrais-

ing night at the Helston Park clubrooms on Wednesday, June 15, just three days before the All Blacks take on Wales at Westpac Stadium. The evening will be MC'd by another New Zealand rugby legend in commentator Grant Nisbett. Tickets, which cost $100 per head, will

include a swept-up three-course buffet dinner with beer and wine. Steve will then speak on his experiences as coach of the world rugby champions.  There are a limited number of tickets available to the public; contact Barry Ellis (bellisnz@gmail.com) or Steve Moffatt (chequery@gmail.com).

Rugby results Another big winner for the club at the weekend was the reserve grade Cripples who downed arch-rivals Wests Mixed Veges 48-5 to retain the much soughtafter Sandy Mounsey Memorial Cup which they can now tuck away until next season.

North Wellington Men’s Premier football side carried on their winning way on Saturday with a 3-1 league win at Redwood Park against neighbours Tawa. Expectations were high for the match with both teams coming off first round Chatham Cup wins last week. Going into the match the rivals were level pegging on the league table but with the honours going to North Wellington they have moved into equal third place. This week North Wellington will look to consolidate their prominent league place when they host Brooklyn Northern United who have struggled this season and were drubbed 5-0 by Kapiti Coast United on Saturday. Meanwhile league leaders Waterside Karori maintained their superb league run with a hard fought 2-1 home win in their top of the table clash with Western Suburbs. This was the club’s sixth win from seven league games and this latest win put them four points clear in the race for promotion to the Central League. Following their shock exit in the Chatham Cup to Petone, Waterside Karori will now be firmly focused on winning the Premier League and this week they will face a tough away challenge from third placed Island Bay in what looks like it will be the match of the round.

Johnsonville Premier One’s team lost out to Wainuiomata at the weekend.

The Johnsonville Rugby Football Club's Colts team continued their winning way when they defeated Old Boys University 30-12 at Alex Moore Park on Friday night. They are unbeaten this season to remain atop the JRD Cup table.

The Johnsonville Under-85s scored a big win, taking Poneke out by 45 points to 14. This took their record to five wins and two losses for the season to date. The club's two premier teams didn't fare so well on Saturday, both suffering big defeats at the hands of Wainuiomata.

The Khandallah Tennis and Squash club are set to host a Wellington competition over the next few days. The local club will play host to The Pelorus Trust Wellington Squash Open from Thursday, May 26 to 29. Local players will be showing off their skills on the Thursday. This will be a great event for the club to host and they are expecting a high quality field throughout the tournament.

Newlands College cricketers are set to be coached by one of Wellington’s finest for the next three years. The Johnsonville Cricket Club announced they had signed Ivan Tissera who will work as the new director of coaching and coaching coordinator for the Johnsonville Cricket Club and Newlands College cricket. Ivan has had over thirty years of experience as a player, coach and administrator. He is a New Zealand Cricket level three coach and is highly regarded for his technical coaching skills in batting and spin bowling. In addition to having specific responsibility for the Premier and Premier Reserve Men’s teams at the club, Ivan will also assist with coaching the lower grade teams and have an overview of

the women’s games. He will work alongside the existing coaching support team at Newlands College to further develop and attempt to recreate the strong reputation the college had a decade ago. International cricketer and Newlands College old boy Luke Woodcock said the college had not had a Premier team in at least 10 years. “It will be great for the club and the college to have this connection,” Luke said. Ivan will be working at the College twice a week with both the 1st X1 and the year nine and 10 combined teams. It was hoped with Ivan’s presence at the College the talented players who previously wanted to go outside the area for their secondary schooling, out of belief cricket was better supported elsewhere, would think twice

and look to develop their cricket in Newlands. Ivan has been New Zealand Women’s A head Coach, Wellington Blaze co-coach, Wellington A Men’s Assistant Coach, and for the past seven years has been Wellington College 1st X1 Coach and Director of Cricket at the College. He also coached at the Wellington under 17 and under 15 levels. Johnsonville Cricket Club Captain Rick Mudgway said the appointment of Ivan would be a fantastic opportunity for both the club and the college. “This is a huge appointment by the Club as we look to develop the work initiated by our previous coach Michael Parlane. We hope that with Ivan’s excellent reputation in Wellington that existing and new players will benefit from his undoubted expertise,” Rick said.