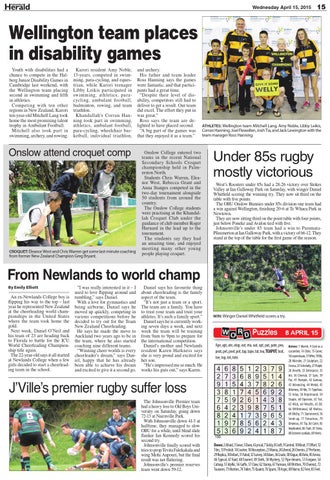 Wellington team places in disability games Youth with disabilities had a chance to compete in the Halberg Junior Disability Games in Cambridge last weekend, with the Wellington team placing second in swimming and fifth in athletics. Competing with ten other regions in New Zealand, Karori ten-year-old Mitchell Lang took home the most promising talent trophy in Ambulant Football. Mitchell also took part in swimming, archery, and rowing.

and archery. His father and team leader Ross Hanning says the games were fantastic, and that participants had a great time. “Despite their level of disability, competitors still had to deliver to get a result. Our team did excel. The effort they put in was great.” Ross says the team are delighted to have placed second. “A big part of the games was that they enjoyed it as a team.”

Onslow College entered two teams in the recent National Secondary Schools Croquet championship held in Palmerston North. Students Chris Warren, Eleanor West, Rebecca Grant and Anna Stanges competed in the two-day tournament alongside 50 students from around the country. The Onslow College students were practising at the Khandallah Croquet Club under the guidance of club member Roger Hurnard in the lead up to the tournament. The students say they had an amazing time, and enjoyed meeting many other young people playing croquet.

Under 85s rugby mostly victorious West’s Roosters under 85s had a 28-26 victory over Stokes Valley at Ian Galloway Park on Saturday, with winger Daniel Whitfield scoring the winning try. They now sit third on the table with five points. The OBU Onslow Bunnies under 85s division one team had a win against Wellington, finishing 20-6 at Te Whaea Park in Newtown. They are now sitting third on the point table with four points, just below Poneke and Avalon tied with five. Johnsonville’s under 85 team had a win to ParemataPlimmerton at Ian Galloway Park, with a victory of 66-12. They stand at the top of the table for the first game of the season.

From Newlands to world champ By Emily Elliott

An ex-Newlands College boy is flipping his way to the top – last year he represented New Zealand at the cheerleading world championships in the United States where the team took home the gold. Next week, Daniel O’Neil and his team of 23 are heading back to Florida to battle for the ICU World Cheerleading Championship title again. The 22-year-old says it all started at Newlands College when a few girls decided to start a cheerleading team in the school.

“I was really interested in it – I used to love flipping around and tumbling,” says Daniel. With a love for gymnastics and being airborne, Daniel says he moved up quickly, competing in various competitions before he decided to try out for the Team New Zealand Cheerleading. He says he made the move to Auckland two years ago to be in the team, where he also started coaching nine different teams. “Winning cheer worlds is every cheerleader’s dream,” says Daniel, happy that he has already been able to achieve his dream and excited to give it a second go.

Daniel says his favourite thing about cheerleading is the family aspect of the team. “It’s not just a team or a sport. The team are a family. You have to trust your team and trust your athletes. It’s such a family sport.” Daniel says he is currently working seven days a week, and next week the team will be training from 9am to 9pm to prepare for the international competition. Daniel’s mother and Newlands resident Karen Harkness says she is very proud and excited for her son. “He’s impressed me so much. He works his guts out,” says Karen.

J’Ville’s premier rugby suffer loss The Johnsonville Premier team had a heavy loss to Old Boys University on Saturday, going down 72-13 at Nairnville Park. With Johnsonville down 41-3 at halftime, they managed to slow OBU for a while, until blind slide flanker Ian Kennedy scored his second try. Johnsonville finally scored with tries to prop Tevita Falekakala and wing Mohi Aupouri, but the final result was not flattering. Johnsonville’s premier reserves team went down 59-12.