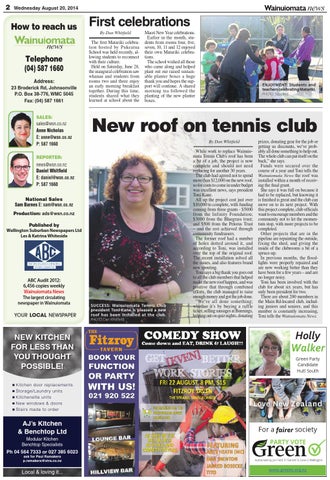 First celebrations By Dan Whitfield The first Matariki celebration hosted by Pukeatua School was held recently, allowing students to reconnect with their culture. Held on Saturday, June 28, the inaugural celebration saw whanau and students from rooms two and three enjoy an early morning breakfast together. During this time, students shared what they learned at school about the

Maori New Year celebrations. Earlier in the month, students from rooms four, five, seven, 10, 11 and 12 enjoyed their own Matariki celebrations. The school wished all those who came along and helped plant out our raised sustainable planter boxes a huge thank you and hopes the support will continue. A shared morning tea followed the planting of the new planter boxes.

The largest circulating newspaper in Wainuiomata

While work to replace Wainuiomata Tennis Club’s roof has been a bit of a job, the project is now complete and should not need replacing for another 30 years. The club had agreed not to spend more than $12,000 on the new roof, so for costs to come in under budget was excellent news, says president Toni Kane. All up the project cost just over $10,000 to complete, with funding coming from three grants - $5000 from the Infinity Foundation; $3000 from the Bluegrass trust; and $500 from the Pelorus Trust – and the rest achieved through community fundraisers. The former roof had a number of holes dotted around it, and according to Toni, was installed over the top of the original roof. The recent installation solved all the issues, and also features brand new spouting. Toni says a big thank you goes out to all the club members that helped make the new roof happen, and was positive that through combined efforts, the club managed to raise enough money and got the job done. “We’ve all done something; whether it’s by buying a raffle ticket, selling sausages at Bunnings, helping out on quiz nights, donating

prizes, donating gear for the job or getting us discounts, we’ve probably all done something to help out. The whole club can pat itself on the back,” she says. Funds were secured over the course of a year and Toni tells the Wainuiomata News the roof was installed within a month of receiving the final grant. She says it was full on because it had to be replaced, but knowing it is finished is great and the club can move on to its next project. With this project complete, club officials want to encourage members and the community not to let the momentum stop, with more projects to be completed. Other projects that are in the pipeline are repainting the outside, fixing the shed, and giving the inside of the clubrooms a bit of a spruce-up. In previous months, the floodlights were properly repaired and are now working better than they have been for a few years – and are no longer noisy. Toni has been involved with the club for about six years, but has only been president for two. There are about 200 members in the Main Rd-located club, including juniors and seniors, and this number is constantly increasing, Toni tells the Wainuiomata News.