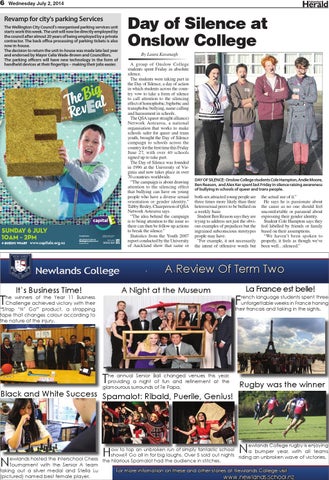 The Wellington City Council's reorganised parking services unit starts work this week. The unit will now be directly employed by the council after almost 20 years of being employed by a private contractor. The back office processing of parking tickets is also now in-house. The decision to return the unit in-house was made late last year and endorsed by Mayor Celia Wade-Brown and Councillors. The parking officers will have new technology in the form of handheld devices at their fingertips – making their jobs easier.

Day of Silence at Onslow College By Laura Kavanagh A group of Onslow College students spent Friday in absolute silence. The students were taking part in the Day of Silence, a day of action in which students across the country vow to take a form of silence to call attention to the silencing effect of homophobic, biphobic and transphobic bullying, name calling and harassment in schools. The QSA (queer straight alliance) Network Aotearoa, a national organisation that works to make schools safer for queer and trans youth, brought the Day of Silence campaign to schools across the country for the first time this Friday June 27, with over 40 schools signed up to take part. The Day of Silence was founded in 1996 at the University of Virginia and now takes place in over 70 countries worldwide. “The campaign is about drawing attention to the silencing effect that bullying can have on young people who have a diverse sexual orientation or gender identity,” Tabby Besley, Chairperson of QSA Network Aotearoa says. “The idea behind the campaign is to bring attention to the issue so there can then be follow up actions to break the silence.” Statistics from the Youth 2007 report conducted by the University of Auckland show that same or

both-sex attracted young people are three times more likely than their heterosexual peers to be bullied on a weekly basis Student Ben Reason says they are trying to address not just the obvious examples of prejudices but the ingrained subconscious steretypes people may have. “For example, it not necessarily the intent of offensive words but

the actual use of it.” He says he is passionate about the cause as no one should feel uncomfortable or paranoid about expressing their gender identity. Student Cole Hampton says they feel labelled by friends or family based on their assumptions. “We haven’t been spoken to properly, it feels as though we’ve been well…silenced.”

A Review Of Term Two

A Night at the Museum

he winners of the Year 11 Business Challenge achieved victory with their “Strap ‘N’ Go” product, a strapping tape that changes colour according to the nature of the injury.

he annual Senior Ball changed venues this year, providing a night of fun and refinement at the glamourous surrounds of Te Papa.

Rugby was the winner

ewlands College rugby is enjoying ow to top an unbroken run of simply fantastic school a bumper year, with all teams shows? Go all in for big laughs. Over 5 sold out nights riding an unbroken wave of victories. ewlands hosted the Interschool Chess the hilarious Spamalot had the audience in stitches. Tournament with the Senior A team For more infomation on these and other stories at Newlands College visit taking out a silver medal and Stella Lu (pictured) named best female player. www.newlands.school.nz