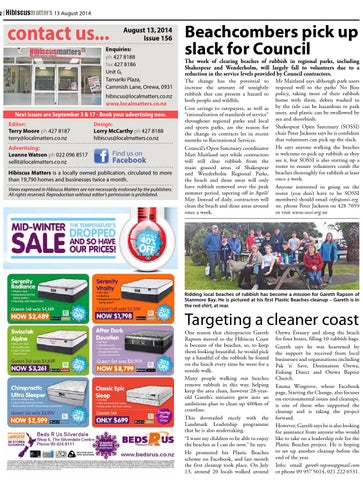 Hibiscus Matters is a locally owned publication, circulated to more than 19,790 homes and businesses twice a month. Views expressed in Hibiscus Matters are not necessarily endorsed by the publishers. All rights reserved. Reproduction without editor’s permission is prohibited.

Beachcombers pick up slack for Council

The work of clearing beaches of rubbish in regional parks, including Shakespear and Wenderholm, will largely fall to volunteers due to a reduction in the service levels provided by Council contractors. The change has the potential to Mr Maitland says although park users increase the amount of unsightly respond well to the parks’ No Bins rubbish that can present a hazard to policy, taking most of their rubbish home with them, debris washed in both people and wildlife. Cost savings to ratepayers, as well as by the tide can be hazardous to park “rationalisation of standards of service” users, and plastic can be swallowed by throughout regional parks and local sea and shorebirds. and sports parks, are the reason for Shakespear Open Sanctuary (SOSSI) the change in contracts let in recent chair Peter Jackson says he is confident that volunteers can pick up the slack. months to Recreational Services. Council’s Open Sanctuary coordinator He says anyone walking the beaches Matt Maitland says while contractors is welcome to pick up rubbish as they will still clear rubbish from the see it, but SOSSI is also starting up a main grassed areas of Shakespear roster to ensure volunteers comb the and Wenderholm Regional Parks, beaches thoroughly for rubbish at least the beach and dune areas will only once a week. have rubbish removed over the peak Anyone interested in going on the summer period, tapering off in April/ roster (you don’t have to be SOSSI May. Instead of daily, contractors will members) should email info@sossi.org. clean the beach and dune areas around nz, phone Peter Jackson on 428 7059 or visit www.sossi.org.nz once a week.

Ridding local beaches of rubbish has become a mission for Gareth Rapson of Stanmore Bay. He is pictured at his first Plastic Beaches cleanup – Gareth is in the red shirt, at rear.

One reason that chiropractor Gareth Rapson moved to the Hibiscus Coast is because of the beaches, so, to keep them looking beautiful, he would pick up a handful of the rubbish he found on the beach every time he went for a seaside walk. Many people walking our beaches remove rubbish in this way, helping keep the area clean, however 28-yearold Gareth’s initiative grew into an ambitious plan to clean up 400km of coastline. This dovetailed nicely with the Landmark Leadership programme that he is also undertaking. “I want my children to be able to enjoy the beaches as I can do now,” he says. He promoted his Plastic Beaches scheme on Facebook, and last month the first cleanup took place. On July 13, around 20 locals walked around

Orewa Estuary and along the beach for four hours, filling 10 rubbish bags. Gareth says he was heartened by the support he received from local businesses and organisations including Pak ‘n’ Save, Destination Orewa, Fishing Direct and Orewa Baptist Church. Emma Wingrove, whose Facebook page, Starting the Change, also focuses on environmental issues and cleanups, is one of those who supported the cleanup and is taking the project forward. However, Gareth says he is also looking for assistance from anyone who would like to take on a leadership role for the Plastic Beaches project. He is hoping to set up another cleanup before the end of the year. Info: email gareth.rapson@gmail.com or phone 09 957 5014, 021 222 6531.