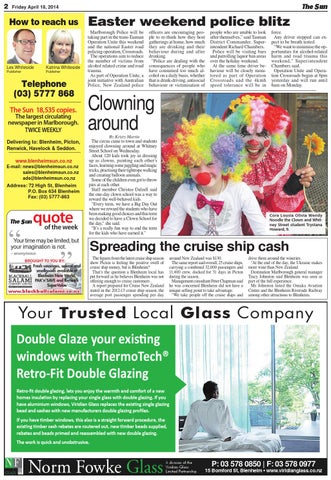 How to reach us

quote of the week

Easter weekend police blitz Marlborough Police will be taking part in the trans-Tasman Operation Unite this weekend and the national Easter road policing operation, Crossroads. The operations aim to reduce the number of victims from alcohol related crime and road trauma. As part of Operation Unite, a joint initiative with Australian Police, New Zealand police

officers are encouraging people to re-think how they host gatherings at home, how much they are drinking and their behaviour during and after drinking. “Police are dealing with the consequences of people who have consumed too much alcohol on a daily basis, whether that is drink-driving, antisocial behaviour or victimisation of

people who are unable to look after themselves,” said Tasman District Commander, Superintendent Richard Chambers. Police will be visiting bars and patrolling liquor ban areas over the holiday weekend. At the same time driver behaviour will be closely monitored as part of Operation Crossroads and the 4kmh speed tolerance will be in

force. Any driver stopped can expect to be breath tested. “We want to minimise the opportunities for alcohol-related harm and road trauma this weekend,” Superintendent Chambers said. Operation Unite and Operation Crossroads began at 6pm yesterday and will run until 6am on Monday.

Clowning around By Kristy Martin The circus came to town and students enjoyed clowning around at Whitney Street School on Wednesday. About 120 kids took joy in dressing up as clowns, painting each other’s faces, learning some juggling and magic tricks, practising their tightrope walking and creating balloon animals. Some of the children even got to throw pies at each other. Staff member Christee Dalzell said the one-day clown school was a way to reward the well-behaved kids. “Every term, we have a Big Day Out where we reward the students who have been making good choices and this term we decided to have a Clown School for the day,” she said. “It’s a really fun way to end the term for the kids who have earned it.”

your imagination is not.

Spreading the cruise ship cash The figures from the latest cruise ship season show Picton is feeling the positive swell of cruise ship money, but is Blenheim? That’s the question a Blenheim local has put forward as he believes Blenheim was not offering enough to cruise customers . A report prepared for Cruise New Zealand stated in the 2012-13 cruise ship season, the average port passenger spending per day

around New Zealand was $130. The same report said overall, 25 cruise ships, carrying a combined 32,000 passengers and 11,400 crew, docked for 31 days in Picton during the season. Management consultant Peter Chapman said he was concerned Blenheim did not have a unique selling point to take advantage. “We take people off the cruise ships and

drive them around the wineries. “At the end of the day, the Ukraine makes more wine than New Zealand Destination Marlborough general manager Tracy Johnston said Blenheim was seen as part of the full experience. Ms Johnston listed the Omaka Aviation Centre and the Blenheim Riverside Railway among other attractions to Blenheim.

Your Trusted Local Glass Company Double Glaze your existing windows with ThermoTech® Retro-Fit Double Glazing Retro-fit double glazing, lets you enjoy the warmth and comfort of a new homes insulation by replacing your single glass with double glazing. If you have aluminium windows, Viridian Glass replaces the existing single glazing bead and sashes with new manufacturers double glazing profiles. If you have timber windows, this also is a straight forward procedure, the existing timber sash rebates are routered out, new timber beads supplied, rebates and beads primed and reassembled with new double glazing. The work is quick and unobstrusive.

A division of the Viridian Glass Limited Partnership