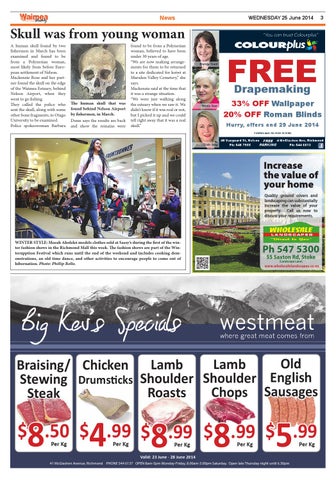 Skull was from young woman A human skull found by two fishermen in March has been examined and found to be from a Polynesian woman, most likely from before European settlement of Nelson. Mackenzie Rose and her partner found the skull on the edge of the Waimea Estuary, behind Nelson Airport, when they went to go fishing. They called the police who sent the skull, along with some other bone fragments, to Otago University to be examined. Police spokeswoman Barbara

The human skull that was found behind Nelson Airport by fishermen, in March. Dunn says the results are back and show the remains were

found to be from a Polynesian woman, believed to have been under 30 years of age. “We are now making arrangements for them to be returned to a site dedicated for koiwi at Marsden Valley Cemetery,” she says. Mackenzie said at the time that it was a strange situation. “We were just walking along the estuary when we saw it. We didn’t know if it was real or not, but I picked it up and we could tell right away that it was a real skull.”

WINTER STYLE: Meeah Aholelei models clothes sold at Sassy’s during the first of the winter fashion shows in the Richmond Mall this week. The fashion shows are part of the Winterupption Festival which runs until the end of the weekend and includes cooking demonstrations, an old time dance, and other activities to encourage people to come out of hibernation. Photo: Phillip Rollo.