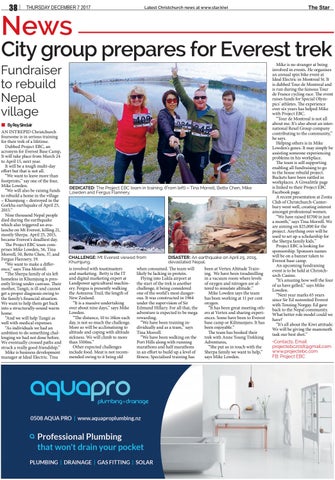 City group prepares for Everest trek Fundraiser to rebuild Nepal village    By Roy Sinclair AN INTREPID Christchurch foursome is in serious training for their trek of a lifetime. Dubbed Project EBC, an acronym for Everest Base Camp, It will take place from March 24 to April 15, next year. It will be a tough multi-day effort but that is not all. “We want to leave more than footprints,’’ say one of the four, Mike Lowden. “We will also be raising funds to rebuild a home in the village – Khumjung – destroyed in the Gorkha earthquake of April 25, 2015.’’ Nine thousand Nepal people died during the earthquake which also triggered an avalanche on Mt Everest, killing 21, mostly Sherpa. April 25, 2015, became Everest’s deadliest day. The Project EBC team comprises Mike Lowden, 56, Tina Morrell, 50, Bette Chen, 37, and Fergus Flannery, 19. “We want to make a difference,’’ says Tina Morrell. “The Sherpa family of six left homeless in Khumjung is presently living under canvass. Their mother, Tangii, is ill and cannot get a proper diagnosis owing to the family’s financial situation. We want to help them get back into a structurally-sound warm home. “And we will help Tangii as well with medical expenses. “As individuals we had an ambition to do something challenging we had not done before. We eventually crossed paths and struck a really good friendship.’’ Mike is business development manager at Ideal Electric. Tina

is involved with toastmasters and marketing. Betty is the IT and digital marketing expert at Landpower agricultural machinery. Fergus is presently walking the Aotearoa Trail, the length of New Zealand. “It is a massive undertaking over about nine days,’’ says Mike Lowden.    “The distance, 10 to 16km each day, is not so much the challenge. More so will be acclimatising to altitude and coping with altitude sickness. We will climb to more than 5500m.’’ Other expected challenges include food. Meat is not recommended owing to it being old

when consumed. The team will likely be lacking in protein. Flying into Lukla airport at the start of the trek is another challenge, it being considered one of the world’s most dangerous. It was constructed in 1964 under the supervision of Sir Edmund Hillary. For all that, the adventure is expected to be mega rewarding. “We have been training individually and as a team,’’ says Tina Morrell. “We have been walking on the Port Hills along with running marathons and half marathons in an effort to build up a level of fitness. Specialised training has

been at Vertex Altitude Training. We have been treadmilling in a vacuum room where levels of oxygen and nitrogen are altered to simulate altitude.’’ Mike Lowden says the team has been working at 11 per cent oxygen. “It has been great meeting others at Vertex and sharing experiences. Some have been to Everest base camp or Kilimanjaro. It has been enjoyable.’’ The team has booked their trek with Anne Young Trekking Adventures, “She put us in touch with the Sherpa family we want to help,’’ says Mike Lowden.

Mike is no stranger at being involved in events. He organises an annual spin bike event at Ideal Electric in Montreal St. It is dubbed Tour de Montreal and is run during the famous Tour de France cycling race. The event raises funds for Special Olympics’ athletes. The experience over six years has helped Mike with Project EBC. “Tour de Montreal is not all about me. It’s also about an international Rexel Group company contributing to the community,’’ he says. Helping others is in Mike Lowden’s genes. It may simply be assisting someone experiencing problems in his workplace. The team is self-supporting enabling all fundraising to go to the house rebuild project. Buckets have been rattled in workplaces. A Givealittle page is linked to their Project EBC Facebook page. A recent presentation at Zonta Club of Christchurch-Canterbury went well, creating interest amongst professional women. “We have raised $1700 in just a month,’’ says Tina Morrell. We are aiming on $25,000 for the project. Anything over will be used to set up a scholarship for the Sherpa family kids.’’ Project EBC is looking for sponsorship. Sponsors names will be on a banner taken to Everest base camp. An upcoming fundraising event is to be held at Christchurch Casino. “It’s amazing how well the four of us have gelled,’’ says Mike Lowden. “Next year marks 65 years since Sir Ed summited Everest with Tenzing Norgay. Ed gave back to the Nepal community. What better role model could we have? “It’s all about the Kiwi attitude. We will be giving the mammoth task our best shot.’’ •Contacts. Email projectebc2018@gmail.com www.projectebc.com FB: Project EBC