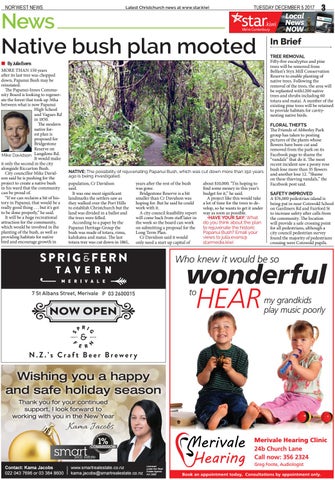 News Native bush plan mooted By Julia Evans MORE THAN 150 years after its last tree was chopped down, Papanui Bush may be reinstated. The Papanui-Innes Community Board is looking to regenerate the forest that took up 36ha between what is now Papanui High School and Vagues Rd in 1850. The modern native forest plan is proposed for Bridgestone Reserve on Mike Davidson Langdons Rd. It would make it only the second in the city alongside Riccarton Bush. City councillor Mike Davidson said he is pushing for the project to create a native bush in his ward that the community can be proud of. “If we can reclaim a bit of history in Papanui, that would be a really good thing . . . but it’s got to be done properly,” he said. It will be a huge recreational attraction for the community, which would be involved in the planting of the bush, as well as providing habitats for native bird and encourage growth in

NATIVE: The possibility of rejuvenating Papanui Bush, which was cut down more than 150 years ago is being investigated.

population, Cr Davidson said. It was one most significant landmarks the settlers saw as they walked over the Port Hills to establish Christchurch but the land was divided in a ballot and the trees were felled. According to a paper by the Papanui Heritage Group the bush was made of totara, rimu, kahikatea and matai. The last totara tree was cut down in 1861,

years after the rest of the bush was gone. Bridgestone Reserve is a bit smaller than Cr Davidson was hoping for. But he said he could work with it. A city council feasibility report will come back from staff later in the week so the board can work on submitting a proposal for the Long Term Plan. Cr Davidson said it would only need a start up capital of

about $10,000. “I’m hoping to find some money in this year’s budget for it,” he said. A project like this would take a lot of time for the trees to develop, so he wants to get it under way as soon as possible. •HAVE YOUR SAY: What do you think about the plan to rejuvenate the historic Papanui Bush? Email your views to julia.evans@ starmedia.kiwi

TREE REMOVAL Fifty-five eucalyptus and pine trees will be removed from Belfast’s Styx Mill Conservation Reserve to enable planting of native trees. Following the removal of the trees, the area will be replanted with1200 native trees and shrubs including 60 totara and matai. A number of the existing pine trees will be retained to provide habitats for cavitynesting native birds. FLORAL THEFTS The Friends of Abberley Park group has taken to posting pictures of the plants whose flowers have been cut and removed from the park on its Facebook page to shame the “vandals” that do it. The most recent incident saw a peony rose bush lose more than 35 flowers and another lose 12. “Shame on these thieving vandals,” the Facebook post said. SAFETY IMPROVED A $76,000 pedestrian island is being put in near Cotswold School on Gardiners Rd and Fairford St to increase safety after calls from the community. The location will provide a safe crossing point for all pedestrians, although a city council pedestrian survey found the majority of pedestrians crossing were Cotswold pupils.

Who knew it would be so

Wishing you a happy and safe holiday season Thank you for your continued support, I look forward to working with you in the New Year