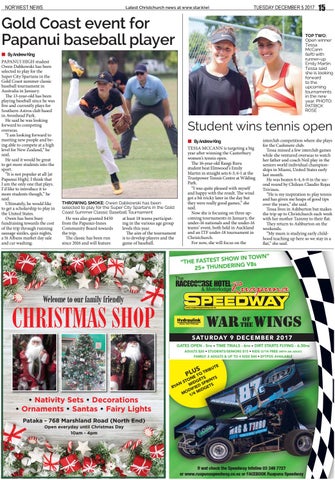 Gold Coast event for Papanui baseball player By Andrew King PAPANUI HIGH student Owen Dabkowski has been selected to play for the Super City Spartans in the Gold Coast summer classic baseball tournament in Australia in January. The 13-year-old has been playing baseball since he was five and currently plays for Southern Astros club based in Avonhead Park. He said he was looking forward to competing overseas. “I am looking forward to meeting new people and being able to compete at a high level for New Zealand,” he said. He said it would be great to get more students into the sport. “It is not popular at all [at Papanui High]. I think that I am the only one that plays. I’d like to introduce it to more students though,” he said. Ultimately, he would like to get a scholarship to play in the United States. Owen has been busy fundraising towards the cost of the trip through running sausage sizzles, quiz nights, a St Albans market day sale and car washing.

THROWING SMOKE: Owen Dabkowski has been selected to play for the Super City Spartans in the Gold Coast Summer Classic Baseball Tournament

He was also granted $450 from the Papanui-Innes Community Board towards the trip. The classic has been run since 2016 and will feature

at least 18 teams participating in the various age group levels this year. The aim of the tournament is to develop players and the game of baseball.

By Andrew King TESSA MCCANN is targeting a big year after winning the Canterbury women’s tennis open. The 16-year-old Rangi Ruru student beat Elmwood’s Emily Martin in straight sets 6-3, 6-1 at the Trustpower Tennis Centre at Wilding Park. “I was quite pleased with myself and happy with the result. The wind got a bit tricky later in the day but they were really good games,” she said. Now she is focusing on three upcoming tournaments in January, the under-16 nationals and the under-16 teams’ event, both held in Auckland and an ITF under-18 tournament in Christchurch. For now, she will focus on the

interclub competition where she plays for the Cashmere club. Tessa missed a few interclub games while she ventured overseas to watch her father and coach Neil play in the seniors world individual championships in Miami, United States early last month. He was beaten 6-4, 6-0 in the second round by Chilean Claudio Rojas Trivinos. “He is my inspiration to play tennis and has given me heaps of good tips over the years,” she said. Tessa lives in Ashburton but makes the trip up to Christchurch each week with her mother Tammy to their flat. They return to Ashburton on the weekends. “My mum is studying early childhood teaching up here so we stay in a flat,” she said.

Welcome to our family friendly

If wet check the Speedway Infoline 03 349 7727 or www.ruapunaspeedway.co.nz or FACEBOOK Ruapuna Speedway