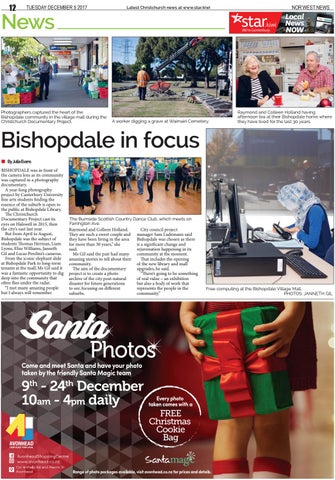 Photographers captured the heart of the Bishopdale community in the village mall during the Christchurch Documentary Project.

A worker digging a grave at Waimairi Cemetery.

Raymond and Colleen Holland having afternoon tea at their Bishopdale home where they have lived for the last 30 years.

Bishopdale in focus By Julia Evans BISHOPDALE was in front of the camera lens as its community was captured in a photography documentary. A year-long photography project by Canterbury University fine arts students finding the essence of the suburb is open to the public at Bishopdale Library. The Christchurch Documentary Project cast its eyes on Halswell in 2015, then the city’s east last year. But from April to August, Bishopdale was the subject of students Thomas Herman, Liam Lyons, Elise Williams, Janneth Gil and Lucas Perelini’s cameras. From the iconic elephant slide at Bishopdale Park to long-term tenants at the mall, Ms Gil said it was a fantastic opportunity to dig deep into the community that often flies under the radar. “I met many amazing people but I always will remember

Raymond and Colleen Holland. They are such a sweet couple and they have been living in the area for more than 30 years,” she said. Ms Gil said the pair had many amazing stories to tell about their community. ​The aim of the documentary project is to create a photo archive of the city post-natural disaster for future generations to see, focusing on different suburbs.

City council project manager Sam Ludemann said Bishopdale was chosen as there is a significant change and rejuvenation happening in its community at the moment. That includes the opening of the new library and mall upgrades, he said. “There’s going to be something of real value – an exhibition but also a body of work that represents the people in the community.”